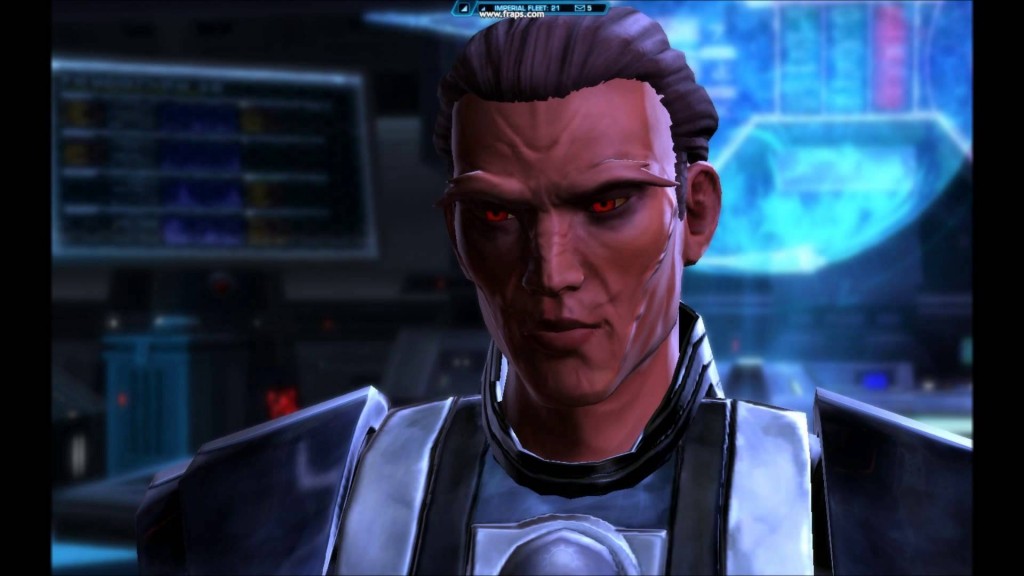 BioWare posted a new story telling developer blog post yesterday. This one is pretty bad ass. Apparently – this guy:  Darth Arkous (from the forged alliances quest ) – got in a spacesuit, jumped of a spacecraft to a fleeing escape pod, punctured the hull of it with his light saber, and killed a spy. It almost sounds like what M1-4X would have done, except M1-4X don’t need no space suit. He breathes pure Republic liberty. You can read the whole blog post on the official Star Wars: The old Republic website here, or our copy pate below:

Observation of my subject continues. It’s entirely business as usual. Oversight, consultations, strategy discussions. A good deal of his time is spent behind closed doors without my presence. It’s always been that way with us, but it used to be I had no reason to question the reason for his privacy.

Working with him from day to day as if nothing’s amiss has not been easy. When I look him in the eye and ask him a question and know that he’s lying to me, it is difficult to believe that this is the same man who recruited me into his world. How far back does the deception go?
***
My first impression of Darth Arkous was that of a vain and pompous statesman. I recall not being all that impressed with him, but his offer to act in an advisory role for the military was too promising an opportunity to pass up. This was especially true as my first exposure to Arkous’s work would involve overseeing the invasion of Talay, the site of a major Republic outpost and communications hub.

Despite the self-assured manner in which he carried on about his plan, I had to admit it was a clever initiative that would minimize resistance while maximizing confusion amongst the planet’s populace. What not even Arkous had accounted for, however, was that the Republic was executing a plot of its own that would threaten to place his offensive in jeopardy.

An SIS team was already aboard Arkous’s ship when we departed from Dromund Kaas. I was meditating, setting my passions free to roil and reach. Spies are taught to withstand the persuasive powers of the Force, to protect their minds from harm. While this sort of discipline is useful against direct confrontation from someone like myself, it tends to be a fairly useless means of mental camouflage. Point of fact, it acts as a virtual beacon to any Sith familiar with the telltale signs of someone walling off their thoughts.

I could sense that the enemy assets–four of them–were apart from one another, unable to communicate for fear of discovery. I sought out the one nearest to me and, after some initial resistance, convinced him to tell me everything. They were to slice whatever data they could and then remotely detonate an explosive device on our craft from the safety of an escape pod. I had been concerned the spies were sent to subvert the Talay initiative, but it was clear they knew nothing of it. Not yet, at least. They still had a reasonable chance of revealing our plan to their superiors, and an even better chance of killing us all.

I reached out to Arkous, warning him of the danger. Separate but working together we silently stalked and eliminated two more. I then came upon the final SIS agent, who was busy priming the explosive device within the belly of the ship. I thought I had the drop on her, but she had surgical enhancements. Inhumanly alert and impossibly fast. I struck and missed and by the time I recovered she was already on her way to the escape pods.

With the need for subterfuge over, I sounded the alarm. As I worked to defuse the bomb the crew tried their best to stop the agent, but they failed. She had already launched the escape pod. I gave word to the bridge to jam all communications and then let Darth Arkous decide whether to pull her in via tractor beam or obliterate her with our cannons. That was when she detonated a secondary device inside the ship’s electrical hub. We had no comms. No tractor beams. No weapons. And we had no idea what she might have learned of our initiative, and there was nothing we could do about it. Even the Force couldn’t stop her from broadcasting the data if she wanted to. I watched the pod depart, wishing I had done more, when I witnessed something truly astounding.

The pod slowed as a figure rocketed from our ship. It was Darth Arkous, outfitted for space. He slammed against the pod and plunged his lightsaber into it. That was enough to compromise the pod’s integrity. Its interior became the agent’s tomb.

Darth Arkous went above and beyond to preserve the Empire’s edge against the Republic. He may have played the self-important bureaucrat, but by his actions he was undoubtedly a selfless and devoted patriot. From that moment forward, I was certain I had made the right choice in becoming his advisor.
***
My subject recently made arrangements to pilot a shuttle to Onderon. He claimed he must negotiate a sensitive matter with the planet’s temperamental queen regarding troop commitments. That would be all well and good if he was actually going to Onderon.

He has arrived on Manaan instead. Without the proper clearance codes I find myself unable to land, but I must see this through, if only to prove that he’s simply engaged in something petty or embarrassing. Unfortunately, I don’t think I’ll prove any such thing. I feel with every fiber of my being that this is something more.
Something terrible.