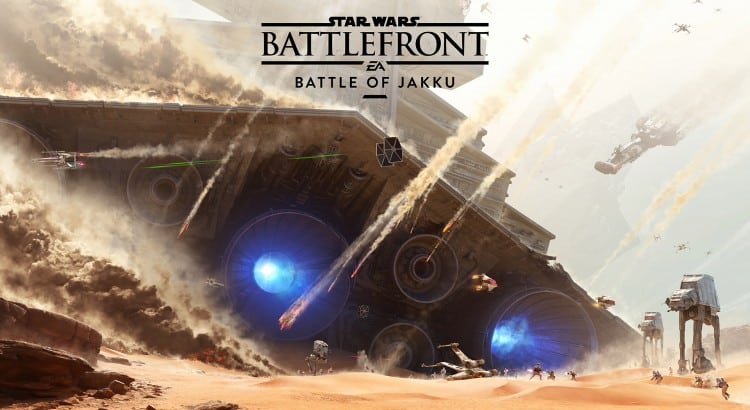 It has been known for a while that Star Wars: Battlefront, the much hyped and hotly anticipated game developed by DICE, set for a November 17, 2015 release, would be tied into the canon pushed forth by Star Wars: The Force Awakens, and that the game would be used to explain some of the storylines from the movie, filling in the canon-gaps specifically with the Battle of Jakku, a downloadable batch of content which will be made available some 3 weeks after the official release of the game.

Star Wars: Battlefront was conceived and marketed as the game which would allow gamers to relive some of the most iconic battles of the Star Wars universe, from a novel and immersive perspective and considering that, the addition of the Battle of Jakku, a canon-episode unknown to everyone, is indeed a master-stroke which delivers more than what has been promised.

The Battle of Jakku, which – canon-wise – takes place 29 years before the events depicted in The Force Awakens, becomes available on December 8. Those who have pre-ordered the game though, will be able to get their hands on it on December 1, a full week earlier.

The first real glimpse at what the Battle of Jakku would be like was offered by a new trailer released just a couple of days ago, and despite the fact that the footage is only a few seconds long really, it delivers a wealth of information to those familiar with The Force Awakens trailer-verse. The Saving Private Ryan-like scene, which takes place on the desert planet, shows a couple of crashed Star Destroyers as well as one in the process of smashing into the planetary surface – something which would explain how the artifacts shown in the movie trailers on Jakku got there.

Another takeaway from the trailer concerns the truly epic nature of the battle, which does indeed look like something no true Star Wars fan would ever want to miss.