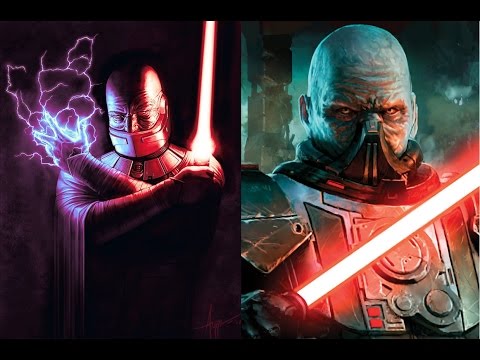 It’s a story as old as time – who will win? Battling off our favorite super heroes, villains, or even singers and actors is a favorite pastime for many. Star War fans are not excluded from this. We’ve had our fair share of matchups and face-offs here over the years, with the dark side battles being some of the most interesting. Now, we have another one to explore. The Darths are always some of my favorites.

In a battle between the Sith Lords, Darth Malak vs. Darth Malgus, who would win? It’s an interesting question posed by one YouTuber and we want to explore it with him.

Check out the video below to see the two compared in full detail, and then you can decide for yourself who would reign superior.

“Darth Malak, the traitorous apprentice to Darth Revan, the scourge of the galaxy during the Jedi Civil War; and Darth Malgus, the Betrayer of the Empire, the harbinger of death during the Great Galactic War. Two powerful Sith Warriors, separated by centuries, but inextricably linked by the roles they played in the schemes of the immortal Emperor Vitiate. If these two scourges of the Old Republic ever met on the battlefield, who would win?”

See the video from Jensaarai1 to see who he thinks would win and then let us know in the comments if you agree with this assessment.

So, what do you think? If you had to place your bets in the cantina, what horse would your money be on? Would it be as close a match and he says he thinks it would be?