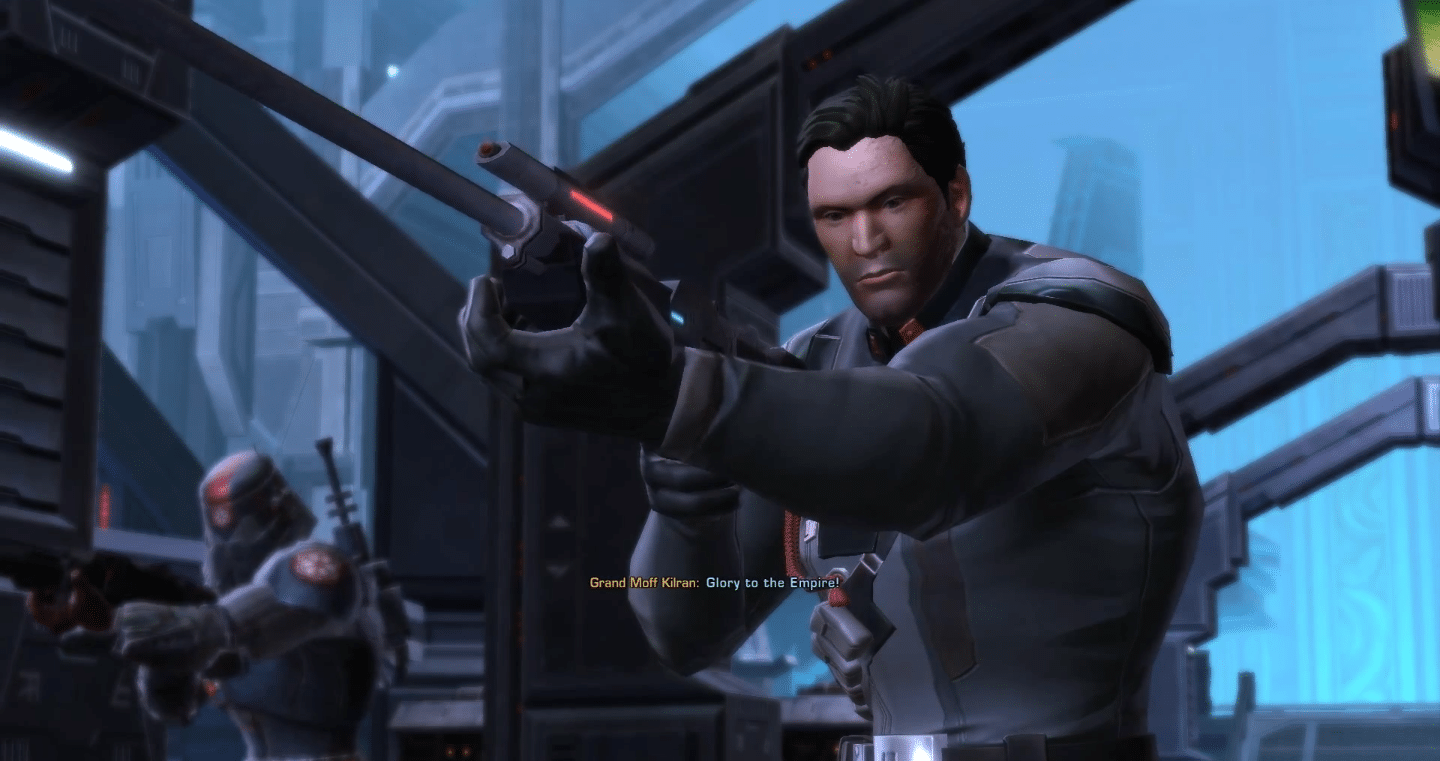 Maelstrom Prison is a Flashpoint for Republic only and it’s a continuation of Taral V but expect the battles to be harder than the ones you fought in that one. This Flashpoint is the equivalent to the Imperial Flashpoint The Foundry. Maelstrom is an enormous green cloud, which is made of raw energy and charged space dust that interferes with navigation computers and coordinates.

This was a very important place during the Great Galactic War because this is where the Sith Empire hid a space station where Revan was held prisoner.

To be a part of this Flashpoint, you don’t need to complete the quest Jedi Prisoner but you do need to be on it. You’ll encounter 3 bosses, a couple of mini-bosses and you’ll have the opportunity to fight a bonus boss.

The first boss you come across is the X-37 Oppressor Droid. He’s basically a big robot guarding a door with two abilities. Power Punch is the main one and it will affect your tank. When the boss uses this attack, it will knock your tank upwards into the air. If you’re out in the middle, he’ll knock you all the way across the room so try to be with your back in a corner so you’ll hit the wall instead.

Punishment is the second ability X-37 will send out. When he uses this ability, he’ll pull the two closest members of your group (excluding tanks) to him and begin channeling Punishment. This is a four second cast. When the cast ends, massive amounts of AoE damage will hit anyone within range. Therefore, you need to run as far as you can from X-37 when you see him channeling this ability.

Colonel Daksh is the second boss you’ll encounter and he’ll have two normal adds by his side. He has three abilities that you need to be aware of. The first one is Grapple + Carbonize where he will pull you in and administer stun for a few seconds. This won’t do a lot of damage and you can avoid it if you run into the boss as he pulls you in. The second ability is Wrist Laser Burst. This is a standard attack that doesn’t really do a lot of damage but you can interrupt it if you want.

Smash is the third ability and it deals out 4.4K HP damage to anyone that is near the boss. In order to avoid this attack, you’ll need to be a good distance away from him because it has a long, very powerful knockback range. Daksh will perform this ability before going into the laser optical phase.

The laser optical phase will last for about 30 seconds and it usually happens when Daksh health reaches between 55 to 60 percent and again around 20 percent. Pay close attention to where you are standing and aggro during this phase or you may be one or two shotted.

Your biggest indication that Daksh is going into the laser optical phase is when he performs Smash but there will also be a red text on the screen saying Daksh is charging his optical implants. There will also be a 5 second cast, which you cannot interrupt called Laser Eye Charge.

During the 5 seconds when this boss is casting this spell, he will be immobilized. This is your chance for the DPS to get as far away as possible and hide behind the boxes, while your tank is generating aggro and taking cover. Do not take cover behind the barrels because they will not protect you from the laser zap.

As soon as the boss cast this spell, he enters the laser optical phase. Once he enters this phrase, your tank will need to hold aggro while interrupting Daksh’s out of LOS. You can do this by putting one of the boxes between you and him before you get laser zap.

At the same time, the DPS and healers can attack but they must stay out of his LOS. Getting zapped can do a lot of damage or even take you out of the fight. Healers must be alert and ready to heal in case the Eye Laser does hit someone.

Lord Kancras is a mini-boss that you’ll meet after beating Colonel Daksh. He will release a lot of normal adds but they are only about 5K HP, so they’re easy to beat. You can end the fight quickly by staying focused on burring down Kancras.

Lord Vanithrast is a mini-boss with an add called Mutant Maelstrom Shriek. This add is at champion level and you cannot CC him. The best way to start this fight is to burn down Maelstrom Shriek and then concentrate your efforts on the boss.

Vanithrast has what appears to be an uninterruptible Spinning Strike ability that last for about six seconds. It will dish out 2.5K HP damage per tick in a 360-degree field to any member of your team that’s near him. All melee DPS should move out of his range when he performs this ability.

He also has another ability called Spike. When Vanithrast health is low, he’ll go into stealth mode right after channeling the Spinning Strike. When he pops out, he’ll force speed someone and then stab them with this 8K HP damage move.

Immediately following that, he will use a stun/force choke for three seconds. While this is going on, your tank should taunt him back. Occasionally, if a target is near him, instead of going into stealth he’ll, turn and stab the person so be aware of this. After beating him, you’ll need to make your way to the third boss.

On your way to meet the final boss, you’ll run into The Maelstrom Elite Guard. This is made up of 3 elite trash mobs that will go after your tank. They cannot be CC’d so it can be difficult fighting all three at once. For this reason, you’ll need to burn them down one at a time. Once this fight is over, you’ll meet Frand Moff Kilran.

This is the last boss in the Maelstrom Prison flashpoint and it will go in three phases. First, you’ll face the Fifth Fleet Bodyguards, which are two very strong adds guarding the boss. Take them down with burn first before attacking Kilran. Once you do that, phase two will begin.

At this point, the boss will be positioned in front of the ramp at the end of a long walkway. Every member of your group will be affected by a debuff that will slow down your movement. It will only last a minute or two but you cannot remove it. The boss will make a 3 second cast called Snipe and it has a hit of 9.6K HP. It will be followed by a series of 3 second channeled cast that hit around 2K HP. You cannot interrupt any of these.

The main thing to remember when fighting this boss is to stay out of LOS. You can do this by staying behind the pillars as you move up and ranged DPS can do damage to the boss while hiding behind them. In the meantime while still moving up, melee DPS can kill off the normal adds that Kilran will summon. At 50 percent health, Kilran will knockback and begin the last phase.

Phase 3 is about the same as phase 2 except when you get on the ramp, you’ll need to use the box to stay out of his LOS and kill the adds as quickly as possible. As soon as you take down Grand Moff Kilran, you’ve completed the flashpoint, Maelstrom Prison.

Once you complete Painful Employment, a multi-stage bonus mission, you can unlock a bonus boss called the Ancient Maelstrom Flayer. For the most part this will be a tank and spank fight but he does have one surprise in store for you. Be ready for Smash, a very tough knockback ability that will deal out about 7K HP damage.

It can knock any member of your group a good distance back, so you’ll want to avoid it if at all possible. Have your tank turn him to face a wall to help reduce the impact of this move. Healers need to be ready to heal anyone that does take on damage.

Why else do you think he was so pissed at Obi-Wan.

Revenge of the moisture farm boy

He's out of line but he's right

I miss Rex’s handprint on his old armor the most

Anakin, we need to have a talk

A lot happened in a very short period

I feel a great disturbance

The archives are now complete

Some information about Luke

I got it now

Mourning is not the Jedi way I guess

I mean, I understand. Its hard not to make them.

General Kenobi and his collection.