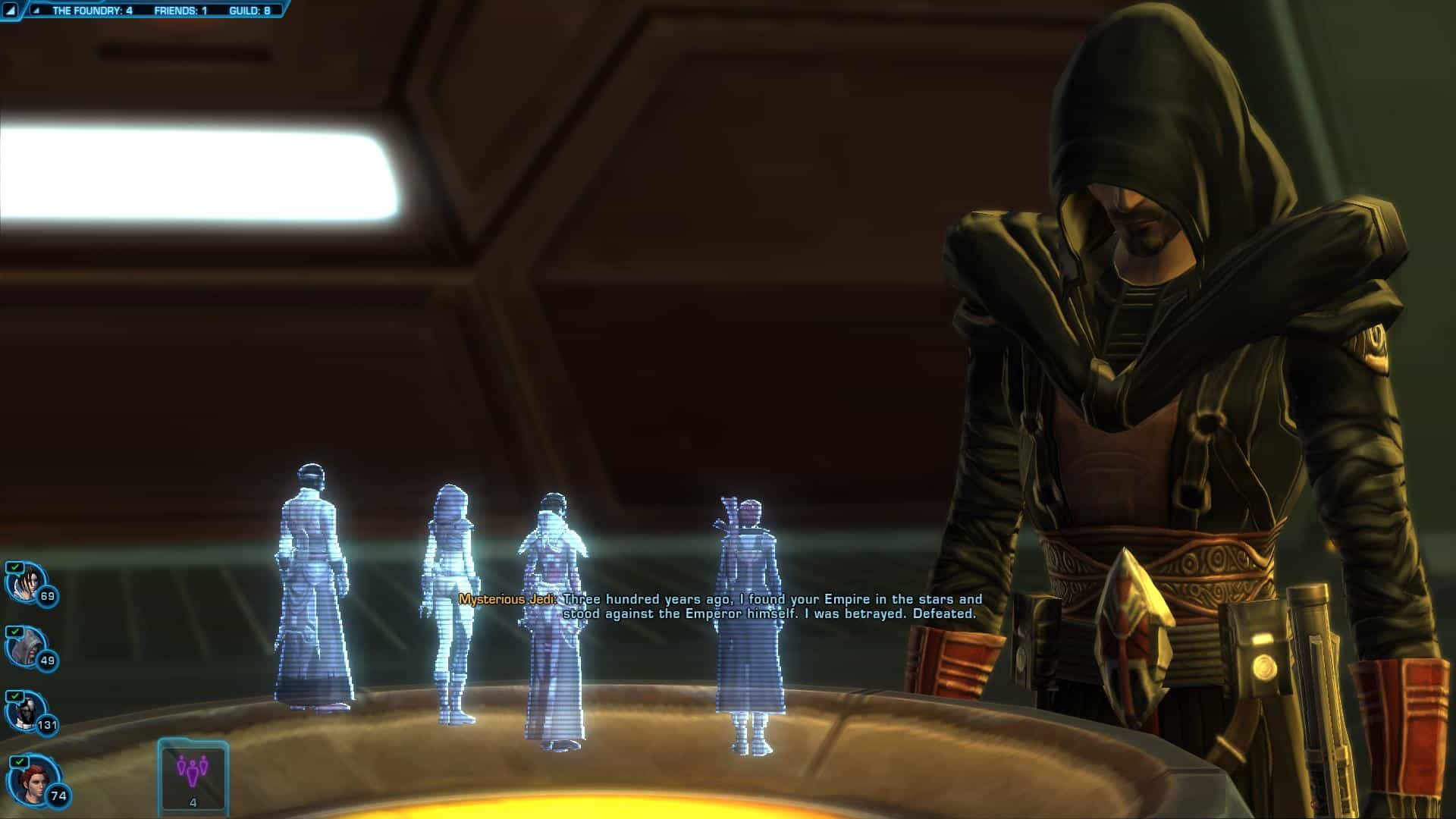 The Foundry is the Imperial equivalent to the Maelstrom Prison Flashpoint and you can access it after completing the Dorin’s Sky/Boarding Party Flashpoint. The Foundry is an ancient weapon with the ability to create mass destruction. After a high level Republic master Jedi prisoner escaped and made his way to the Foundry, it’s your job to track him down, defeat him and claim the Foundry for the Empire.

It’s recommended that everyone in your group be at least a level 35 or above before tackling this flashpoint. You’ll encounter 3 bosses and 2 mini-bosses throughout this instance.

The first boss fight happens right at the beginning of this instance when you encounter The Foundry Guardian. He is a large droid with 71K HP but don’t be intimidated by his size. This is the standard tank and spank battle. However, he does have a channeled ability called Molten Burst with 15m range that will last for several seconds. You cannot interrupt this AoE fire attack and it will do a lot of damage if you’re within range.

The second boss you’ll encounter is HK-47 and he will put up a good fight. He is an assassin series droid with several abilities. To beat HK, your team will need to work together and stay focused. It requires coordination and due to the amount of damage he can dish out, inexperienced or low-level healers will find it difficult to keep up.

In the beginning of the fight, you might think this is going to be easy because this boss will only have his rifle and a Flamethrower frontal attack with DoT effect. As long as your tank keeps him facing away from the rest of the group you should do fine.

However, after sustaining a certain amount of damage, the boss will deem you as a worthy opponent and the battle will quickly change gears.

At this point, HK-47 will spawn two melee extermination droid adds to assist him. They both have 7K HP and can do a lot of damage so you’ll need to take them down quickly. CC one of them while you burn down the other or DPS them. After spawning the adds, HK-47 will stealth and reappear in one of the corners. Your tank needs to be ready to grab agro on him again as quickly as possible because he has now gained two more abilities.

One is an AoE knockback ability, after which he will begin sniping random targets. His snipe ability can do 3K HP per shot, which will easily kill any member of your team who has below 50 percent health. Since this move has the ability to dish out lots of damage, your tank will need to taunt him back. The other ability is grenades that he throws out at random targets and these will do a good amount of AoE damage, as well.

The second wave of adds will consist of two ranged extermination droids, so the fight will be more difficult than the first one although it will be similar. Once you have killed the second wave of adds, the boss will port to the central housing in the middle of the room where he first spawned.

He’ll encase himself in a powercore and this is the only chance you’ll have throughout the fight to recharge your resources. You’ll need them at full capacity once he reappears because he will be even stronger than he was during the first part of fight. After reappearing with his new abilities, he’ll begin spawning the adds again and everything starts over. This cycle will continue until someone wins the battle.

You can prevent him from encasing himself in the powercore if you destroy the 4 panels located on the pillars outside of the central housing. One option for destroying the panels is for your tank to taunt the adds and then have everyone else focus their attention on them while the tank destroys the panels.

This is a long, drawn out fight that will become more difficult as you go. For this reason, try to stop the boss from encasing himself in the powercore. This battle will take its toll on your team but once you take down HK-47, you’ve got it made.

The first mini-boss you’ll encounter is called Burrower Matriarch. For the most part this is a tank and spank fight. However, the boss will leave puddles of acid that does 2K HP damage per tick, so you must avoid these. He also has a frontal knockback that can push you into the puddles if you’re not careful. Healers do need to keep the tank above 50 percent in health or Matriarch can wipe him out.

The second mini-boss you’ll fight is called N4-10 Exterminator but this is a real easy fight. Have your tank face him away from the rest of the group to avoid frontal attacks and stay out of the blue circles on the ground. As long as you do this, you won’t have any trouble beating this mini-boss.

Revan is the third and final boss and while this battle shouldn’t be as long as the last boss fight, it is not without challenges. First, Revan will use Force Choke on a random member of your team where he picks them up into the air and chokes them. Your healers and tank needs to avoid this attack. If your tank is caught in it, he will turn on the closest DPS.

Revan also has an enormous knockback ability that will easily knock you off the edge, so stay near the center of the room. It won’t affect anyone outside of his proximity so ranged DPS and healers should be safe.

Another ability he has is the Force Push where he’ll choose a random member of your team and push him to the other side of the room. When you tank gets pushed, Revan will begin attacking the closest DPS causing lots of damage.

As you draw near the second half of the battle, Revan will begin using Force Storm. This ability will draw your group up close to the boss where he will administer this AoE attack, which deals out 200K HP damage per tick. You’ll need to run away from this attack to avoid damage. However, it also slows you down so getting out of range may be difficult unless it’s purged by your healer or you use force speed to help you move faster.

The last ability will occur when Revan reaches around 20 to 30 percent health. Occasionally, he will cause large rocks or boulders to fall down on your group. As long as you avoid the purple circles scattered on the ground, you will be fine. However, if you are hit by one, it will cause major damage.

After the introduction of Patch 1.0.1a, Revan can be a little buggy. During channeled ability Force Storm, do not attack him once he drags your group to him. If you DPS him below 10 percent in health during this attack or when he’s channeling Falling Boulders, it creates a glitch that makes it impossible to kill him. If your group encounters the glitch and Revan does not trigger the rest of his script, you’ll have to take out your own team to reset the battle.

One thought to “Flashpoint Guide: The Foundry”