Over on Taugrim.com, they provide some stats into the game and the faction choices that are being made on PvP servers so far. This is especially interesting to me since my guild is on a PvP server. The overall stats show 137,732 players have gone Empire and only 66,586 have gone Republic. This means that the Empire has 2.1 times the total population. That is a significant difference for sure. This is based on stats from the entire world population.

Here is a snippet of the post that discusses this: 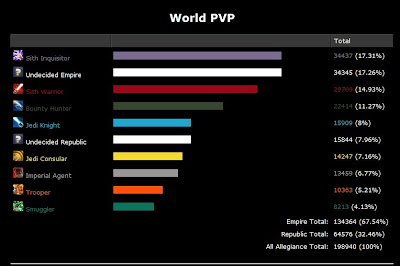 He goes on to discuss why this is significant as well as why it is a good idea to have more balance between the factions when it comes to PvP. He also compares SWTOR and these stats to some other games with PvP. Check out the full post for yourself and let us know what you think.

How big of a problem is it to have unbalanced sides? Also, what side are you choosing (or have you already chosen)?