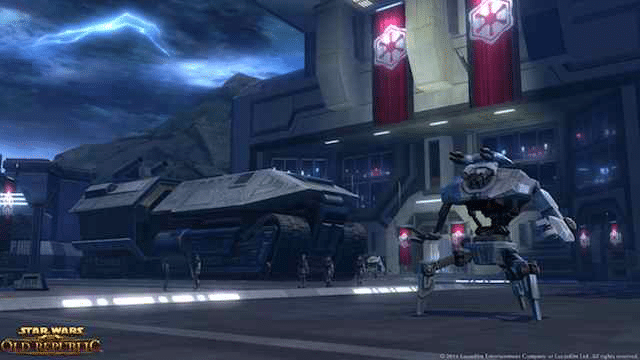 If you’re looking to do the Flashpoint Taral V, it helps to know just what you’re getting into before you get started. It begins when you and your team travel to the Imperial held planet of Taral V and steal the star charts that will lead you to the space station.

The recommended level for this Flashpoint is 33 and there are 6 bosses plus a bonus boss (optional). Many of the trash mobs can be skipped if you are looking to do a quick run but killing them for the extra experience and chance of loot is great if you have the time.

Now let’s take a look at those bosses:

As his name suggests, the handler has pets- two Vinecats that you will have to fight during this battle. Gattan’s cats will attack random party members and they are immune to crowd control. The technique is to heal through the cat attacks and focus all your fire on Gattan and beat him down. He only has one main ability you need to keep watch for- he launches a grenade at a random party member that does great deals of damage to anyone within 8 yards.

Spread out so only one person gets hit by the grenade, burn down Gattan and after he dies, tackle the Vinecats. There’s not much else to it!

Next up is the Captain and he will summon a companion, “Ripper”, a champion mob to fight with him after the encounter is started. The easiest approach to this one is to have the tank kite Ripper away from your group while everyone focuses their fire on Captain Shivanek.

Ripper has an AOE incapacitate ability that happens during enrage (when either of them drops below 25% health) and it can wipe your group easily so keeping Ripper away will prevent this and allow you to beat down the Captain first and then take his buddy out.

Next we have Doctor Zahren who also has some help around his lab that he will bring to the fight. The specimens in the lab tanks around the doctor will be summoned every so often during the fight. When the adds are summoned, he is protected by a shield 25% of incoming damage as long as the adds are alive. So you have to switch fire to the adds and burn them down quickly (AOE helps) and then get back on the boss when they drop.

Now we have PD-44. There are no adds and it’s a basic tank-and-spank fight. Just look out for his ‘Focus Fire’ that will target the player with the most threat and do a lot of damage with a channeled attack. It can be interrupted. In between this attack, he also has an ability that launches a rocket at a random player and does splash damage so being spread out will reduce the strain on your healer. He also has ‘Power Blast’, which you will notice when PD-44’s blasters are glowing red and you should try to interrupt as it does AOE damage to the group.

And finally, you also have Bombardment, an attack from the nearby troops firing their turbo laser batteries. The first attach cannot be avoided and hits hard but after that, you can see the attack by a red target on the ground. All you have to do is avoid the targets to avoid the damage. Move around a lot and interrupt when you can until it’s over.

The final boss is the hardest (as is typical)- this is General Edikar. When you first enter his room, he will send 4 normal-strength turrets around him. The tank should grab the General while DPS works down the turrets as quickly as possible.

Then all focus fire on the boss. At 75% and 50% he will return to the center of the room and summon four normal strength battle droids where the turrets were. Your tank will have the chance to gather them up so you can all AOE them down and focus back on the boss.

It’s important to interrupt his:

He will also throw a grenade at a random party member that has a DoT effect and does a great deal of damage if it is left on for any length of time. Needs to be cleansed as quickly as possible.

There is also a bonus boss in a room near PD-44 that is very challenging, especially for under-geared groups. Abilities include:

You need to fight the boss inside of his room (and blow the electric box near him to take advantage of some extra damage. Healer and ranged DPS can stand outside in the doorway. The healer will be challenged by the Force Lightning which is cast 3 times in a row and followed by an AOE pull-in with slowing effect. When he pulls everyone in, he will cast Force Storm which cannot be interrupted. It does a great deal of damage to everyone at once and is difficult to heal through.

So you need to interrupt the first two Force Lightnings, then have melee run out towards the door. The tank can interrupt the next Force Lightning and everyone can move out of LOS of the boss by using the doorway to avoid the pull-in move on everyone except the tank. This lessons the work on the healer to keep everyone up.

Here’s a video of the fight:

Return to the Telos