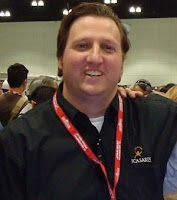 Only months after LucasArts saw its President, Darrell Rodriguez, depart the company, its Executive Producer has now also left. IGN reports that Haden Blackman, executive producer and writer for The Force Unleashed series, has resigned from his LucasArts position. IGN got confirmation from LucasArts on the news and a representative assured that the development of The Force Unleashed II will not be affected.

Blackman issued a statement that included the following:

“I’ve had a fantastic time working with the team at Lucasfilm and am really grateful for their ongoing support.”

“While the decision to leave LucasArts did not happen overnight or come easily, I really feel that now is the best time for me to move on and explore new creative challenges and I look forward to the next phase of my career.”

This news is just coming out so we’ll be sure to update as we learn more on the resignation as well as the fates of other projects to which Haden was attached.