GameSpot brings an extra dose of yesterdays goodies, as they go behind the scenes at Skywalker Sound.

The website interviews, the 5 full-time composer who work on the music for Star Wars: The Old Republic, about the challenges and the excitement of not only writing their own pieces for the game, but also how they had to look at the music John Williams composed 30 years ago without copying his music and style.

We have some really, really talented people working on this project. I think it’s going to sound spectacular. – Will Roget, Composer

Check ut the full movie below, or watch it at Gamespot (Video also available in HD)

One sharp-eyed fan, Chronium, in the official swtor forums caught the title of the sheet music in Gamespot’s video documentary about the music of TOR. At the top it clearly says, “Corellia Intro.” 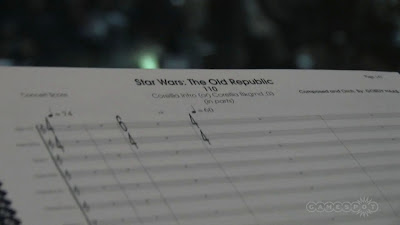 Could this mean that Han Solo’s home planet will be one that we players can explore?