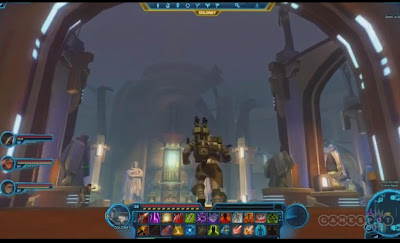 First day of E3 is long gone and it’s time to recap on all the gameplay videos that hit us yesterday.
GameSpot has around seven minutes worth of footage to go over. These are raw, unedited gameplay clips and as such they don’t look as ‘pretty’ as the previous gameplay trailers we’ve seen, but they do give us a little more insight into how the gameplay, particularly with groups, will play out. Check out the background music in the clips, they are absolutely killer!

Swtor-Life had some time to play the Sith Inquisitor on Tatooine, so naturally some Krayt dragon’s had to die 🙂 The video is captured by camera, but still nice watch.

The guys over at Ask A Jedi also got some video footage from Tattoine. This video showes some nice footage of player transportation and the player map, as well as some Sith Warrior ass kicking.

The guys over at Torwars captured some Bounty Hunter footage. It looks like mercenary AC will be comparable to firemages in wow. slow cast times but very big crits. Powertech abilities shown at E3 on the other hand seem to either be short channeled attacks or instant cast, didnt see anything with a real ‘cast time’ like these mercenary abilities have.