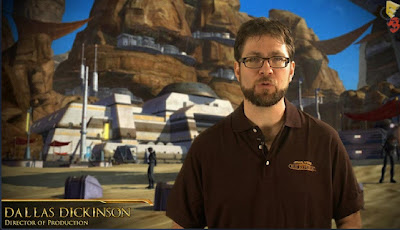 So far E3 has been an explosion of new information where SWTOR is concerned, and it just doesn’t stop, thanks to this excellent walk-through video from SWTOR Director of Production Dallas Dickinson.
The video takes us through the “blazing deserts of Tatooine“”, following a group of archeologists as they look for a lost research facility – and features gameplay from the level 25 point of the game. It’s exciting enough to get a glimpse of some of the story-arc, but even more so to see an early look at in-game footage of the Sith Sorceror character, as well as gameplay opportunities like personal vehicle use and the dynamics of the map.
Additionally the video shows how in-mission co-op play will work in practice, as well as several of the ranged attacks available to the Sorceror and the awesome-looking ability to seeth and replenisg lost health from the Dark Side. All very exciting.
All in all, the 11 minute video is a great showcase for some exciting bits of gameplay, and Dickinson’s accompanying commentary is insightful and engaging, offering invaluable information behind the visuals, like an explanation of how co-op dialogue situations will work, and a brief XP description.
Most exciting of all is the map size suggested by the few map pop-ups, and the distance covered within the game-play itself. If we didn’t already know, it seems this game is going to be some size!
Oh, and ZOMBIES?!!!! Brilliant.

Those attending this year’s Electronic Entertainment Expo are getting a special opportunity to play through a new quest series on the remote world of Tatooine. Whether they chose to play alone, with a companion, or grouped with other players, they are getting a glimpse of some of the secrets lying beneath the sands on this dangerous desert planet.

For those who couldn’t attend E3 this year, we didn’t want you to miss out. BioWare Austin’s Director of Production Dallas Dickinson provides commentary in a new video just posted to the site. Watch it now, and be sure to check back again tomorrow to see more of what’s being shown at E3 for Star Wars™: The Old Republic™.