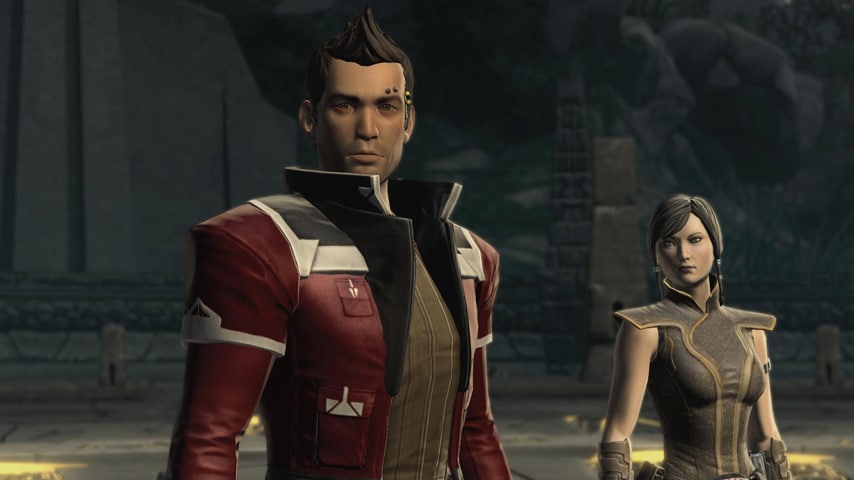 BioWare posted a new story blog post leading up to next patch update. This one is titled Regrets:

Jace Malcom pulled at the cuff of his sleeve. Living most of his life in uniform, he was used to things fitting a certain way. The leather jacket previously hiding in the back of his closet was tight around the shoulders and out of style, judging from the upturned noses of the restaurant’s other clientele.

Despite his position as Supreme Commander, Jace generally didn’t frequent establishments in the Senate District, preferring a more casual atmosphere. However, Thranta’s Respite was known to serve an authentic roast gorak, a dish he’d grown fond of from his time on Alderaan. He hoped the food was better than the decor. The Killik-silk tablecloths and delicately carved oro wood menus were overshadowed by gaudy holographic vistas of the Alderaanian country-side. All pre-civil war of course.

Jace exhaled and considered ordering another Alderaanian brandy. Theron was late. Not an unusual occurrence, but it didn’t help his nerves. He’d hoped with time, he would feel more comfortable in his son’s presence. They had shared a few drinks and checked in via holo once or twice, but Jace certainly didn’t feel like a father. He tried to keep his expectations in check. It wasn’t fair to Theron that his idea of a father-son relationship didn’t match up with reality. Maybe that experience was just one more thing the Empire had stolen from him.

Jace pushed those thoughts aside, knowing it would only sour the evening. As he waved the waiter down for a second drink Theron walked in. He looked distracted – eyes worn and dark around the edges. A couple of stale bruises marked his skin.

It was cruel how much Theron looked like his mother. It wasn’t just their features; Theron and Satele shared similar mannerisms from the way they walked to how they pulled out a chair.

“Get in a fight?” Jace asked, passing him a menu.

“What? No…” Theron sighed and instinctively touched his split lip. “It’s a long story.”

“The Supreme Commander of the Republic has time? In the middle of a war?” Theron joked. “I seriously doubt that.”

Jace struggled to find the words that he was asking as a father, not a commander, but everything sounded too soft, too syrupy.

The moment passed. Theron ordered a Corellian whiskey and eyed the menu. “So what’s good here?”

Theron wrinkled his nose. “I’ve had a hard time eating anything bird-like since Rishi.”

“Oh. Right.” Jace cleared his throat and skimmed the menu to find something else. He was the type of man who went to a restaurant for a specific dish. Branching out wasn’t really his style.

“I’ll try the nerf tenderloin. Can’t go wrong with that, right?” Theron tossed the menu back on the table with an audible thud and leaned back, his eyes scanning the room. An SIS agent through and through.

The waiter returned with their drinks. Jace noticed his uniform was also made from Killik-silk, but dyed dark blue. Probably to show support for House Organa. After rattling off the evening’s specials, he took their orders. Jace raised his glass and Theron followed suit. “To the Republic,” he said.

The restaurant was alive with customers. A woman’s laughter cut above the clinking of utensils and the “refined” blabbering of the upper class. Their table alone sat in silence.

Jace drummed his fingers against the sea-green tablecloth. “When did you get back?”

“A week ago,” Theron answered, watching holographic snow fall upon the Juran Mountains.

Theron laughed. “I’ll head back to the office after this.”

Jace scrolled down the mental checklist he’d prepared for tonight’s dinner. Some discussion topics were obvious – they could easily talk about work or the war. After reading the Yavin 4 report, he was sure Theron had plenty of stories to tell. Still, those were conversations for colleagues. If he wanted to get closer to Theron as a father, perhaps it was time to broach new territory.

Whiskey caught in Theron’s throat. “Yeah, we’re not doing that.”

“I am your father,” Jace stated in gruff embarrassment. “This is an appropriate conversation topic.”

“Point taken.” Jace chuckled, then cleared his throat. “Actually, I did want to ask you about… Grand Master Shan.”

Jace raised his hands. “Just curious how things were between you two.”

“Did she put you up to this?” The younger man asked, irritation rising with each syllable. “Ask you to check in on her ‘agent’?”

Jace sighed. “No, that’d be too duplicitous for her.”

“But not telling you about your son for thirty years — that’s not duplicitous at all.” Theron rolled his eyes and downed his drink.

“I…” Jace paused, careful not to let his own feelings tinge his words. “She did what she thought was right, Theron. Maybe not for you or me, but for the Republic.”

“She’d never say so, but I think she regrets it now.” Jace thought back to his conversation with Satele after the Ascendant Spear debriefing. “We all have regrets.”

Theron paused. “Even you?”

“Especially me.” Jace smiled, deepening the lines on his face.

He leaned back as two navy clad waiters placed their dishes on the table. There was something about a good meal that always brightened the Supreme Commander’s mood. The gorak was cooked to a golden brown, steam still rising from the crisp skin.

“Taste like you remember?” Theron asked, cutting into his steak.

“Nearly,” Jace replied after the first bite. “Hard to get the spices right unless they’re fresh.”

The two men ate quietly. The landscape beside them shifted to the watery Glarus Valley. Pink, dawn stained clouds rolled over frosty hills, their reflection sharp in the calm lake below.

“I understand why she did it,” Theron finally said. “Can’t fault her for it.”

Jace wiped his mouth and folded the starch napkin in his lap. “But…”

“But… I’m not like her.” Theron rested his elbows on the table. “Reason doesn’t wash away feelings. And I don’t know how to feel about her.”

Jace snorted and crossed his arms. “Don’t let that hard exterior fool you. The Grand Master feels just like anyone else. She’s just very good at hiding it.”

Theron’s brows knitted together, pulling at the cybernetics around his left eye. “I don’t want the details, okay? Especially after I just ate, but…Was she like this even back then?”

“Yes. And no.” Jace grinned, swirling the brandy in his glass. “She took more risks. Yours truly being the biggest.”

Even after all these years, it was difficult for Jace to think about his time with Satele. Surrounded by scenic views of Alderaan only made the memory sting more poignantly.

“I can’t tell you what to do, Theron.” The older man said. “Not when it comes to… your mother.”

“After that conversation?” Jace raised an eyebrow. “Absolutely.”

it’s hard to lay low in that thing

Use My Knowledge, I Beg You

They are not wrong

The dentists will decide your fate

Funny that this technically happens twice in the s

*cough* *cough* Shards of the Past?

I mean am I wrong? (it's being repaired all the ti

Padme knows how to shop

I wonder why he didn’t keep the armor, he looks