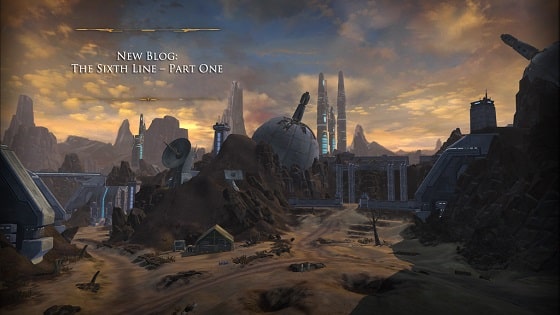 BioWare just posted a new  SWTOR story blog. This one is focusing on the Sixth Line of Jedi and their leader Master Surro

The Sixth Line: Part One

The once-ripe fields of Balmorra lay barren, pockmarked by heavy artillery. The defaced bedrock was the handiwork of not only the Sith Empire but the Balmorran Resistance. One would hope each side might be more careful with the object they were fighting for. The desperate do not possess gentle hands… and these were truly desperate times.

Master Surro stared across the open land from the relative safety of her makeshift mountain encampment. Her eyes were sharp, catching even the faintest movement of charred grass in the afternoon breeze. The air was dry and warm. A sheen of sweat covered Surro’s skin beneath her heavy armor.

Three Jedi waited with Surro on the overlook. Garault, her second in command, was tall and broad shouldered. An angry scar marred his chin — a present from the Imps. Landai, a Mirialan, paced behind them, arms crossed. Her short red hair was plastered to her forehead from the heat. Farther back, a Twi’lek named Onok sat quietly, his eyes closed in meditation. All four had traded their traditional robes for heavy combat gear.

Surro shook her head. “He should be back by now.”

“Give him another hour.” Garault tried to sound reassuring.

Garault clenched his jaw. After Grand Marshall Cheketta’s failure to protect the Balmorran Arms Factory, the Republic had tiptoed around the situation, unwilling to raise the ire of the Empire. While politicians and generals argued about public opinion on Coruscant, Darth Lachris was taking full advantage of her seemingly unlimited weapons supply to strengthen her grasp and strangle the Resistance. Master Surro’s team was the Order’s response. Their mission: buy time until the Senate got their act together. Not even the Supreme Chancellor knew they were here. And it had to stay that way. If Danak was captured and revealed to be a Jedi, the entire operation was at risk.

“We need his information on the Balmorran Arms Factory,” Garault finally said.

“Assuming he wasn’t captured or killed before he reached it,” Landai pointed out.

“The information is valuable enough to check the situation.” Garault’s voice was tense, breaking his usual placid composure.

Garault turned his attention to Surro. “I won’t abandon him.”

“There is no contemplation, there is only duty,” Surro replied, placing a steady hand on Garault’s shoulder. His eyes wavered and the air in his lungs deflated as if the words had punched him in the chest. “Remember the mission.”

Garault lowered his gaze and nodded.

“What’s the plan?” Onok asked, dusting off his gear.

Master Surro turned back to the scorched field. The sky was tinged pink. Night would be upon them soon. Setting her jaw, she steeled herself for what was to come.

The Imps were constantly setting up and breaking down camps along the premises of the Balmorran Arms Factory. This strategy was meant to keep the Resistance guessing, yet Surro noticed the guard schedule remained the same across all outposts. Although efficient, their strict, regulated timetables were a weakness. Anyone with simple observational skills could track shift changes as well as who would be on guard duty at what time. After watching the Imps for months, Surro could recite the schedule in her sleep and knew when the laziest soldiers would be on post.

Cloaking themselves in the darkness of the night, Surro’s team scouted four outposts before spotting Danak. Lying flat on their bellies, they watched from a nearby ledge as Danak, bruised and bloody, was dragged to the center of the camp.

“If they thought he was a Jedi, they’d be more cautious. Full restraints,” Surro whispered. She pushed a stray dreadlock from her forehead. Even in the dead of night, the heat was oppressive.

“He didn’t resist.” Garault’s brows knitted together. “Didn’t want to blow his cover.”

Surro recognized the Imperial officer “escorting” Danak from previous recon missions. Captain Bowenn was a nasty piece of work. He enjoyed inflicting pain more than any Sith she had encountered. A small crowd of soldiers gathered, cheering as Bowenn kicked Danak in the teeth.

Surro felt the tense silence hard against her throat. She licked her chapped lips and tasted the saltiness of sweat. It was her call. There is no contemplation, there is only duty.

“If we charge in and wipe out the camp, Darth Lachris will know and we tip the Republic’s hand.” Her voice held no emotion, but she found the words difficult to say.

“So we leave him?” Garault asked, struggling to keep his voice down.

“He knew the risk.” She met his eyes.

“There is only duty…” Garault’s breath was strained. “What about to our squad?”

“Our duty is to the Order. Do not confuse that with your attachment to Danak.” It wasn’t meant to be a threat, but a reminder from an old friend. “The mission comes first. If there was another way…”

A loud crack, then another, pulled their attention back towards the camp. Bowenn slammed the butt of his blaster against the side of Danak’s face. Garault sucked in warm air with a hiss. His pupils narrowed to a point. Bowenn circled Danak’s crumpled form like a ravenous nexu. The man was practically salivating in anticipation of the kill. Garault pushed himself to his knees, ready to attack, when Surro’s firm hand held him in place.

Bowenn raised his blaster to rest against Danak’s temples and shouted, “Glory to the Empire!” before pulling the trigger. The soldiers roared in satisfaction as Danak’s body fell to ground.

Garault was as still as Danak’s lifeless corpse, his eyes glossy and unfocused. Surro removed her hand from Garault’s arm, afraid that even the softest contact would shatter her friend’s tense frame. Landai swore under her breath and looked away. Onok pursed his lips, but said nothing.

“There is no death, there is only the Force,” Surro whispered.

Bowenn signaled three soldiers to approach. “Clean up this mess,” he ordered, giving the body one final nudge with his boot. “And bring Ivo his finder’s fee. Told him no credits till the job was done.”

“Ivo…” Surro ran the name through her memory, but came up short. “Any of you heard that name before?”

All three soldiers saluted before two took Danak by his arms and legs.

“We follow that one,” Surro said, gesturing towards the third soldier. “I need to know who this Ivo is.”

“We owe him our own finder’s fee,” Landai added.