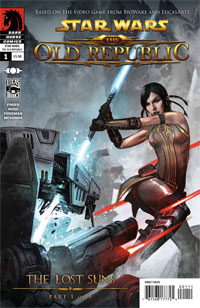 Issue one of Star Wars: The Old Republic – The Lost Suns will be available in comic shops from June 8th! The announcement was made today in the news section on SWTOR.com. To gain more information on the series for fans, they interviewed Alexander Freed about the comic.
Star Wars™: The Old Republic™ – The Lost Suns is a five-issue miniseries from Dark Horse Comics. It covers Theron’s mission and the fallout that comes after. It was written by BioWare Senior Writer Alexander Freed. You may remember him as the author of the previous Dark Horse Comics series Blood of the Empire.
The comic series has art from George Freeman and Dave Ross, with covers by Benjamin Carré. Even if you are not a previous fan of the comics, this series ties directly into the storyline of Star Wars: The Old Republic and has events happening at the same time as the start of the game, making it interesting to those who plan to play the game as well.
In the Question and Answer session on the SWOTR site, Freed explains his role as an employee at BioWare as well as his role in TOR. He also gives a brief introduction to the new comic series so fans can know what it’s going to be about. He also talks about the timeline and how it relates to SWTOR and he talks about Theron Shan and how he relates to the characters of The Old Republic.
Freed also answers fun questions like how writing for the comics differs from writing for the game, and what TOR players can get from reading The Lost Suns.
0
SHARES
ShareTweet