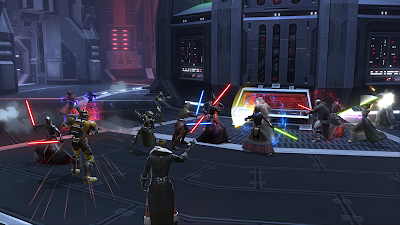 This weeks Friday Update is out and it brings with it a new systems page on the official SWTOR site. TheWarzone Systems page contains details on all three of the available PVP confrontations including a brief description and accompanying video.
Those Warzones are:
The Voidstar, an assault style Warzone set upon a derelict Imperial Battle Cruiser. One faction attempts to fight its way to access the ship’s data core, while the opposing faction defends the ship and attempts to prevent the other side from reaching the data core. The factions are then switched, with the attackers becoming the defenders.
Huttball, an highly tactical Warzone set in a pit-like arena. Teams battle for control of a ball which appears in the center of the arena. The team which collects the ball must run with it, pass it, or use whatever means necessary to carry it across the opposing team’s goal line, while simultaneously battling the enemy team and avoiding numerous hazards designed to quickly end a PC’s life. At the end of the match, the team with the most points wins. In this Warzone, teams from the same faction can face off against each other, meaning Empire vs Empire, Republic vs Republic and the traditional Republic vs Empire match-ups are all possible.
Alderaan, where the forces of the Republic and the Empire battle for control of laser turrets spread out across the battlefield. The more turrets your side possesses, the more damage you’ll unleash upon the enemy transport ship floating overhead. These transports are a source of constant PC reinforcements and destroying them will win you the match.

Check out the Warzone Systems Here.

Warzones in Star Wars™: The Old Republic™ are specific areas outside of the main character story, where players face off against each other in exciting Player-vs-Player combat. In order to give you a more detailed look at each of the different Warzones, we’ve launched a new Warzones Game Systems page! This new page will allow you to learn about each of the different Warzones, and each Warzone breakdown is accompanied by a short video displaying how the Warzone looks in the game.

Be sure to check out the Warzones Game Systems page now, and keep checking back to StarWarsTheOldRepublic.com for more information on Warzones in the coming weeks!