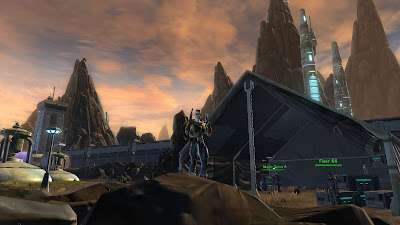 One of the biggest complaints to come out of SWTOR testing so far has been the lack of auto-attack. Another “issue” with the game so far is that there is no ability to create macros. As any MMO vet will tell you, macros are essential to play the game to its fullest potential. There are also certain games and classes that would be nearly impossible to play efficiently without great macros (think of warriors in WoW).

The only way to do this currently in SWTOR is with the Razer keyboard and while it (and the mouse) are pretty darn nifty, we don’t all have the funds to spend on such items just to get the most out of our game. They can be very pricey- after you’ve already paid a great deal on the game itself.

When staff was asked if they would change this in the future, they did not deny or confirm, stating only that we would have to wait and see but that auto-attack and macros would not be in the game at launch. So what is a gamer to do?

Well, there may be some hope for you yet!

Seminko (old time World of Warcraft hacker/explorer) found a way to actually get some form of autoattack/macro to work. While some did not believe it was possible, he made a video to prove to us that it can be done and another video showing how to do the “fix” for yourself.

“Some ppl said this script wouldn’t work, so here’s the proof!”

“With this, you will add the autoattack on every offensive ability, so when you press the desired key it will use the chosen ability first (if you have enough energy), and if you don’t, autoattack will be used”: