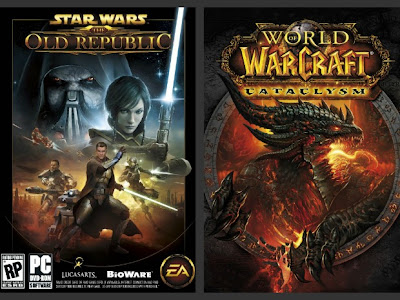 Ah, the classic debate continues as National Post writer. Daniel Kaszor explores the topic of SWTOR’s affect on WoW in Tuesday’s Download Code. As they as “Can EA’s Star Wars MMO make a dent in World of Warcraft?”, we see more evidence of just how serious the business of video games really is.

In an interview with Reuters last week, Activision-Blizzard chief executive Bobby Kotick had this to say about the upcoming Electronic Arts Inc. release of Star Wars: The Old Republic (a game similar to Blizzard’s blockbuster World of Warcraft, but obviously set inside the Star Wars universe).

He then goes on to quote and discuss Kotick’s comments on whether or not EA could steal users from WoW and also questions whether or not rival EA would make any money off of the game at all since they have to share revenue with Lucas Arts. We recently brought you this story, too.

Then he highlights how EA said the game would be profitable if it reaches 500,000 subscribers. He then explains 3 valid points about this incident:

First, EA is trying to attack Activision’s market share by going after the company’s biggest hits: Battlefield versus Call of Duty last month (with a loud PR back and forth between the two companies) and now Star Wars: The Old Republic taking on World of Warcraft.

Second, it makes sense that EA wants a piece of the World of Warcraft market.

Third, Mr. Kotick, who is known to be a fairly outspoken executive, doesn’t really need to be taking pot shots at EA; his balance sheets do the talking.

Then of course, there is some element of truth to the statement, which the writer points out. “George Lucas isn’t known to be stupid about his licensing agreements.”

Finally, he points out that the number of subscribers needed to make the game profitable is actually fairly low. While other games have not been able to survive a year or two against WoW, it’s possible that SWTOR might be the game to do this. He doubts, however, that SWTOR has what it takes to make even a dent in WoW.