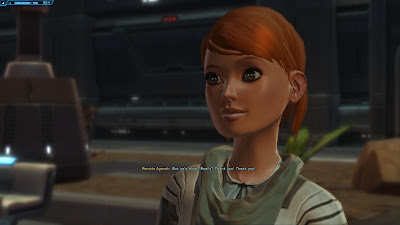 Some people don’t believe that SWTOR is all that innovative in terms of the gaming industry but game director James Ohlen begs to differ. He says to Eurogamer that SWTOR is more innovative than an FPS and then discusses the ways they have made strides in the industry but also why as an MMORPG, SWTOR is not too different.

“It’s been a little bit of an unfair characterisation,” Ohlen remarked to Eurogamer. “”Because if you look at other game genres, if you look at a Battlefield or a Call of Duty or a Gears of War or even a Half-Life – those games use the same tried and true interface and the same tried and true game mechanics of the first-person shooter genre that’s been around for 20 years.

Again, all very valid points. So many comparisons have been made between SWTOR and WoW and some believe that SWTOR is just not that different. In fact, some have gone so far as to say it’s WoW with a Star Wars skin. As a long time MMO-er, and someone who has played WoW from the beginning, I don’t agree with this assessment.

“”I don’t know why the MMORPG genre is not considered to be a genre,” Ohlen shrugged. “”It could be that World of Warcraft has dominated for so long that people just think of it as just a single game genre.

This tends to be the trend that I am seeing, too. So many gamers use WoW as the standard for MMORPGs but it was not the first nor will it be the last. Some aspects of the genre are going to be the same and this familiarity is not copying WoW but is actually what characterizes a game as an MMORPG. Change too much and you’re just not going to fit into the genre anymore.

That pretty much sums it up for me. I think the way that SWTOR is innovative is in the story, the way the story is delivered and other aspects of the game that make it unique such as alignment, Legacy system, etc. In other areas (such as UI), it’s your standard MMO fare and there’s nothing wrong with that as far as I’m concerned.