World of Warcraft did not define any type of standard. Blizzard made an MMO that people love to play, and everyone feels they can capitalize off of that success by making inferior, or direct copy, clones.

The main problem here is that people are afraid to try anything new, and how can you really blame them? It takes time and money, possibly more so than a regular game, and the chance of failure is higher than normal since the market is just so saturated with free to play MMO’s, the juggernaut, and a handful of fairly successful paid MMO’s.

As I see it, there are three kinds of games with three unique objectives:

Grinds exist because they have to. That’s the nature of the game. You will never win an MMO, you wouldn’t want to because that means others can too.

Below flowchart is a little outdated, but it sums up the history of “MMO standards” pretty well: 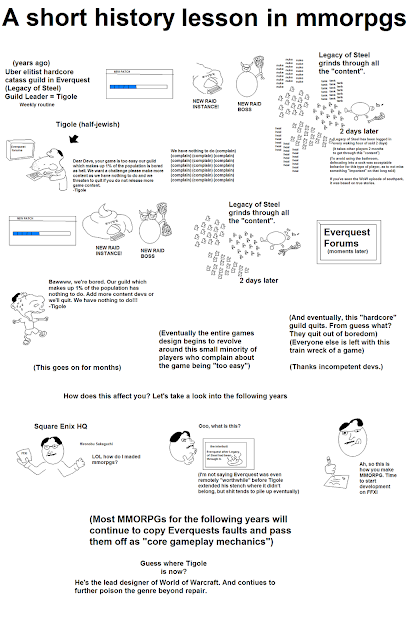