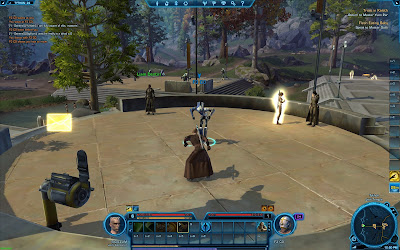 There was a lot of great information coming out of GDC this year and much of it was in regards to SWTOR. A talk given by director of production, Dallas Dickinson and BioWare executive producer Richard Vogel brings us some interesting information about the game. First, building it was hard.

There’s no real surprise there, right? Making a game of this size and caliber is certainly difficult with many, many hours put in by various team members. That’s just to launch- there is still behind the scenes workers every day to keep it running as intended.

PC Gamer brings us the full story on this talk at GDC:

In an hour long session, the pair took us through the production and lessons from a long and gruelling development process that saw Bioware Austin hire huge numbers of developers, outsource much of their art, completely rebuild how their team was integrated, and eventually make strict cuts to game features in a triage process known internally as “The Death Star”.
I happened to get to visit “The Death Star” in person when touring the BioWare headquarters at the Guild Summit so I can tell you, it does exist.
PC Gamer continues:
To build the game, the team hired in stages; first building a structure they thought that would work, before laying on staff. At peak, the team size was staggering: 280 QA staff. 140 artists split evenly between internal and outsourced staff. 80 engineers and programmers, 75 designers, 40 platform engineers and 30 producers to manage the team’s workload and organise.
That is a lot of people handling a lot of things. It must have been hard to organize for certain. Dallas discusses how they struggled with these large numbers at first and suffered some growing pains but they learned proper integration and made it all work out. It’s really an interesting story being able to understand the process that goes into finding the right team to develop a game like SWTOR.