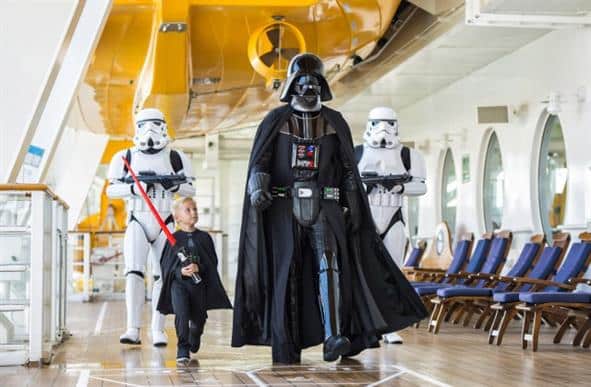 Great news for Star Wars fans! Disney Line has decided to launch a Star Wars themed cruise so fans can have the best vacation ever. A family of four can take this exclusive cruise for $7,000. The cruise will be moving through the waters of the Caribbean and vacationers can have a chat with Darth Vader, Chewbacca, or your favorite character. This is your chance to ask them your most probing questions, like what it’s like to be a Wookie or an evil cyborg.

Adults can have fun at the bar and order a few Star Wars themed drinks. Kids can practice their light saber skills at the Jedi Academy and show off what they learned to their favorite Star Wars character! You will see storm troopers, Ewoks, Jabba the Hutt, and maybe even Princess Leia herself.

Every single Star Wars film will be screened during the time of the cruise and you can watch your favorite moments with fellow Star Wars fans like yourself. What’s not to like about a Star Wars themed cruise? May the force be with you!

Although the Star Wars franchise is showing no signs of retiring, it has still decided to go on a cruise. Disney Line has launched a Star Wars-themed cruise where for the modest sum of $7000USD, a family of four can spend a week in the waters of the Carribbean, talking to Chewbacca and Darth Vader about what it’s like to be a Wookie, or what it’s like to be an evil cyborg with telekinetic powers, or what it’s like to have spent four years learning method acting at Julliard, only to end up on a cruise ship dressed as a giant, incoherent Spaniel.