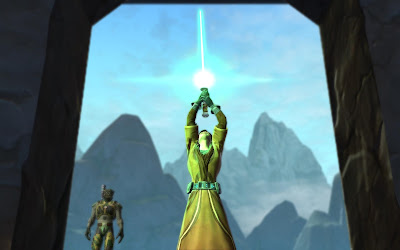 SWTOR has been out for about 2 months now and some of us have been playing since beta or since the launch. If you’ve ever played a newly launched MMO before, you know that the first few months are sometimes the rockiest. There are usually game bugs and other kinks to iron out. Sometimes the community is out of balance or has not had time to stabilize yet. The economy can be wonky as servers balance and players learn how to work things and what the value of things are. So here we sit, two months in and what better time than now to take a look at what is happening in SWTOR?

The crew over at INC gamers have an in-depth review of SWTOR- 2 months in. It’s more than 1,800 words of thoughts and impressions on the game thus far. While they published a positive early review of the game, we must now ask if their opinion has changed. Many players claim to have left the game for various reasons. Are the guys at INC Gamers still enjoying it as much as they did with their initial review?

Here’s a snippet:
Even after two months, I like SWTOR. I like it a lot. It scratches a peculiar itch that I don’t think I ever really noticed I had, in that it gives me an MMO world in which I actually feel like I’m controlling a character (rather than an avatar) and in which I feel genuinely important to the goings-on of the universe at large. The individual storyline for each class makes me feel like I’m effecting changes to the state of the galaxy, and while a lot of it is very clearly smoke and mirrors – I’m not really in a race against time to do X, nor is Y chasing me down, and Z isn’t going to get away – it’s really pleasing smoke, with highly reflective mirrors. You can argue that many characters are derivative or stereotyped, or that the only things that really change are in cutscenes – and you’d be right – but for the most part it’s still entirely compelling as long as you don’t go out of your way to break the immersion for yourself. Or until you see 17 other people with the same companion as you.
The reviewer goes on to talk about some of the downsides to the game. One being the replayability- something I was just talking to my husband about the other day. While there are different classes with individual class storylines, you will still be questing on the same planets. Aside from your class story, it’s all the same. You will find yourself skipping through the dialogue and just wanted to get on with it because you already know what happens.
The reviewer at INC Gamers shares these sentiments and goes on to talk about when the game slows down later as you level and also talks about the variation in the class storylines. Some are definitely better than others and this could vary according to personality of the player.
The review also goes on to one big aspect of SWTOR- the endgame. This is something a lot of current players have complaints about. Many in my guild stopped playing at 50 because they just don’t feel the endgame content is fleshed out enough to keep their interest at this time. You spend 50 levels getting invested into the story of this character and then it all just stops…
Have you been playing for 2 months now? What are your thoughts and impressions on the game at this point in?