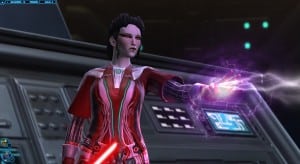 If you’re playing SWTOR, you know that there is still an interest in the game because well… you’re playing with other people. However, depending on which server you are on, it may sometimes feel like there are not as many people out there in the Star Wars universe as you thought.

New numbers revealed at EA’s 4th quarter financial reports show us just exactly how many people are still playing SWTOR- and the number is quite large. SWTOR has1.3 million active subscribers (down from 1.7 million as announced in March).

So those numbers are pretty cool but what does that really mean to us- the players? Well, it means new content is incoming very soon. The report said that two new content packs would be available sometime in the first financial quarter. They were called Legacy and Allies, so we can assume that we’ve already gotten the Legacy patch and now Allies will be on the way before the end of the quarter.

So what do you think “Allies” will be about? When do you think we’ll see it? Let’s get the conversation going as we get pumped up for the next content patch for SWTOR.

There is already discussion happening on the official forums about what this new content might entail. Here’s what Allison Berryman had to say: