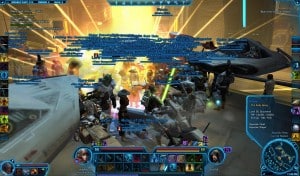 Servers was down for a short maintenance today, and as always BioWare took the time to patch the game. Today is more a tweak then a real patch though, as BioWare only decreased the maximum number of simultaneous players on the Imperial and Republic Fleets. This is a pretty good move if you ask me as I notice my framerate drop from ~50fps to ~19fps while on fleet with 250+ people. I hope this just implies more instances though. Coming from having 4 people on my fleet at peak times, 100 people+ seem like a party! And if there were 6 instances of 100, thats 6 parties!

1.2.7b Patch Notes
6/19/2012
General
In order to improve overall performance, the maximum number of simultaneous players on the Imperial and Republic Fleets has been decreased