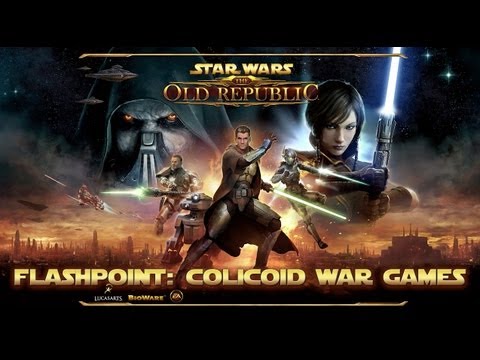 When you reach levels 37 to 41, you can take part in one of the most unique Flashpoints in the game called The Colicoid War Game. It’s not like any of the others because there is only one classic Boss fight at the end. However, you will go though three challenges to complete the instance and both the Empire and the Republic factions have access to this Flashpoint.

During the first challenge, you’ll fight a large group of Colicoid warriors that will run towards you all at once. Your goal is to kill off the warriors as quickly as possible without taking on too much damage. The best defense may be to mount turrets, face the enemy and burn them down.

The order you take them out could mean the difference between winning and losing the battle. For this reason, you may get killed off a couple times before you learn the right order so be prepared.

After killing off the first wave of warriors, you’ll need to get ready for the second wave. These will be even bigger and stronger than the first wave but you can still follow the same plan to take them down. Once you complete wave two, you can move on the second challenge.

The second challenge is also a very unique one and it involves solving two separate puzzles on different platforms while avoiding the Hazard Droids and mobs. The Hazard Droids are responsible for the fire that spews out in front of you, so you need to take them out fast. They will re-spawn every two minutes so be ready for them. In the meantime, you need to watch out for the mobs because they are strong enough to knock you off the platforms but you can knock them off, too.

After killing the Hazard Droid, go to the starting area and kill the droid at the first console on the left. Have someone stand there and operate the console to make the wall on the opposite side of the room drop revealing the next droid.

At this point, the tank needs to pull the droid and the rest of the team needs to have their backs to wall near the console. Kill the droid and have another member of your team operate that console to lower the next wall. Repeat the process two more times until all four walls have dropped.

After the tank gains control of the fourth console, the person at the first one should run quickly to the fifth console at the back. The tank can then disengage and run to the Masterswitch, revealing the elevator and ending round one.

Instead of getting harder to beat the Droids, it will get easier each time you activate a console so don’t worry about your team members not being beside the tank at all times. He should be able to handle the last two by himself.

Now, it’s time for wave two. Hop on the elevator and head to the next platform where you’ll encounter two very large droids. You don’t want to pull them both at the same time so move to the left as the tank pulls one. Kill them and begin to solve the puzzle.

Solving this puzzle is much the same as the first but you’ll need to activate the terminal in this order. Go to the far left, then far right, the far left again and then the last one is next to the second terminal. The walkways on this platform are narrower than they were on the first one so be careful not to be pushed off. Collect you loot and the second challenge is complete.

Right before you encounter the last boss, you’ll have to make the familiar decision of whether to kill the enemy or let them live. Killing gives you +100 dark side points and letting them live gives you +100 light side points. You’ll find this option when you reach the “Use the Registration Computer” part of the instance.

The third challenge is similar to the normal boss fight but before you can fight him, you must face three Arena Beasts. Once you kill the last one, the Annihilator 6K-A2 will appear. He is a large droid with an AoE attack that is easy to avoid. Just move around a lot and stay out of the red circles on the ground to avoid being burned. As long as you do that, this tank and spank fight should be pretty easy to beat.