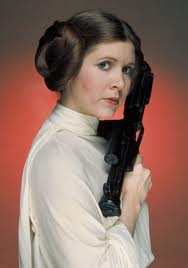 The Internet world has been buzzing about whether or not Carrie Fisher, Mark Hamill (which confirmed there are talks) and Harrison Ford will return to the big screen for the next installment in the Star Wars story. In an interview with Palm Beach Illustrated, Carrie puts some of those questions to rest.

When asked if she could confirm whether or not she would play the role of Princess Leia, she said “Yes.” The interview was fun (in typical Carrie fashion) and went something like this:

What do you think Princess Leia is like today?

I just think she would be just like she was before, only slower and less inclined to be up for the big battle.

And still wearing the bagel buns?

The bagel buns and the bikini, because probably she has sundowners syndrome. At sundown, she thinks that she’s 20-something. And she puts it on and gets institutionalized.

Hah! At least she has a good attitude about the whole thing. She goes on to answer some more questions about her goals, her life motto and where she draws her inspiration in life. It’s a great interview and I am interested to see how this will all pan out and what role she and the others will have in the new films.

Of course at this point, we still have to call this one part of the rumor mill since it has not been officially confirmed. We know better than to get pumped up thinking something is a sure bet but we’ll keep tabs on this one so you’re updated as we are.

Fisher, now 56, may have a role in “Star Wars: Episode VII”, although we don’t know how big that part will be. What do you think?