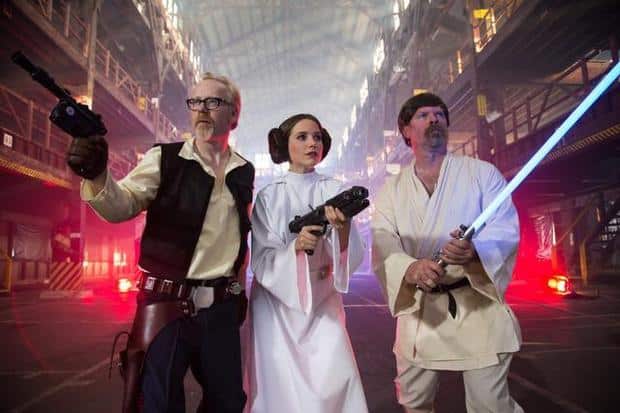 If you are a fan of the show MythBusters, you may have caught the most recent episode where they tackle some myths about Star Wars. But if you’re also a Star Wars fan, you may have skipped right over that episode, not wanting them to burst the bubble of your childhood dreams. We don’t need anyone to prove to us that Star Wars scenes aren’t plausible. Part of the beauty of it all was the wonder, the fantasy, the dream!

But if you are curious and didn’t see it, A.V. Club has a little write-up about this episode of MythBusters.

For starters, the show stays appropriately grounded in scientific fact (or at least conjecture), so lightsabers, TIE fighters, hyperspace, and the Force are left to the sort of “could it ever happen?” conjecture of a Doctor Who special —leaving the hosts (and their trio of less-interesting underlings) to cast their skeptical peepers upon three, more physics-based stunts from the original trilogy. (The prequels are never mentioned—perhaps because “could LucasFilms’ GCI render this convincingly” falls outside of the show’s purview.) Why these three? Well, one is iconic, the other gives sub-hosts Cary, Tory, and Grant something to do, and the third is super-gross. I can think of worse criteria.

Read the full piece to find out about what myths they attempted to bust, as well as commentary from A.V. Club about the entire thing. Love it or hate it, it’s definitely something to get people talking. Do you like it when MythBusters messes with your favorite movies or do you wish they’d just leave it alone and let us enjoy the magic how we remember it?