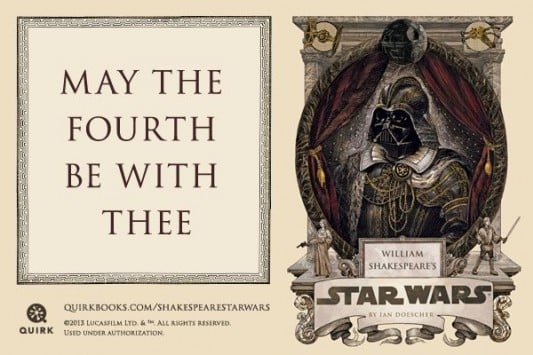 If you love Star Wars but are reluctant to dive into the works of Shakespeare, Ian Doescher has just the book to ease you in to the verses of the Bard.

Dolscher’s takes Star Wars: Episode IV- A New Hope back in time to the 1600s.

Apparently, the project is George Lucas sanctioned, according to Get The Big Picture. The Star Wars creator has reportedly told Doescher he should take the project as far as possible. Perhaps this means we will see the other five episodes given the Hamlettreatment.

Along with references to the Elithabethan author, the book also features period style images, including one with Luke holding a storm trooper’s helmet like a skull.

“The allusions to Shakespeare’s works are references I carry around in my head, so most often the allusions to plays flowed naturally with a particular character’s dialogue. Other times, the references were more carefully planned,” Doescher told Quirk. “”For instance, I knew I wanted to have a scene where Luke was holding a storm trooper’s helmet, similar to Hamlet with Yorick’s skull. The image of Hamlet holding the skull is the image most commonly associated with Shakespeare’s plays, so I really wanted to work in that image.”

The book is on sale now.