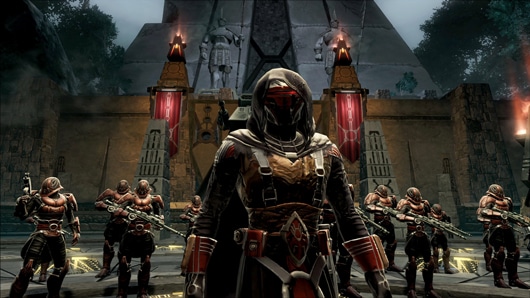 With that Associate Producer For Star Wars: The old Republic, Andrew Horwitz, wrote a blog update over at the official websites, and of course BioWare also released a new trailer to coincide with the official launch. Check it out:

Welcome to the launch of our latest expansion – Shadow of Revan!
The Shadow of Revan Digital Expansion is the grand culmination of the Forged Alliances story arc. Revan is ready to make his boldest move yet, and we are excited to share it with you. When we started developing Shadow of Revan, we wanted to go back to our BioWare roots and focus on the story. We know that BioWare story is at the top of the list for things players want to experience in Star Wars™: The Old Republic™, and we think we’ve delivered that with Shadow of Revan. This expansion is the effort of a lot of dedicated work from people who care deeply about compelling narrative.

Of course, we haven’t left out the usual accoutrements you’d expect from an expansion of this magnitude. The first thing you’ll notice when you log into the game is the new Disciplines system. This has replaced the old Skill Trees system in favor of a more streamlined and user friendly system that allows you to experience the core of your character’s Class very early on in the game.

From there, the game opens up into the Forged Alliances prelude, where you are able to play single-player versions of the Forged Alliances Flashpoints on Tython, Korriban, Manaan, & Rakata Prime. For anyone who hasn’t experienced the lead up to the Shadow of Revan story, this is a great way to jump right in and get caught up.

You’ll then move into the heart of the expansion where you’ll travel to Rishii, the pirate haven at the edge of the galaxy, and end in a climactic encounter on the iconic moon Yavin 4. Along the way you’ll get to experience 2 new Flashpoints, 2 new Operations, a host of new allies and enemies, and all of the action you’ve come to expect from Star Wars: The Old Republic.

Have fun, and may the Force be with you™!
Andrew Horwitz
Associate Producer