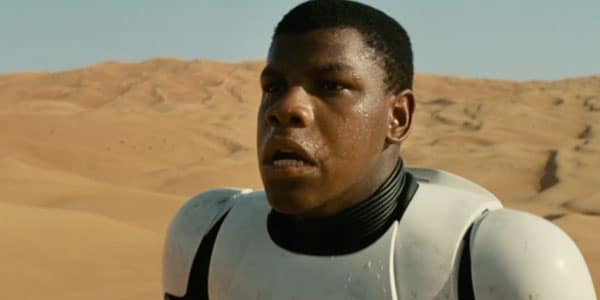 After the release of the Star Wars: The Force Awakens trailer, Star Wars fans were in awe and thrilled about the upcoming blockbuster hit. However, racism started buzzing about the British actor John Boyega, who they featured quite a bit in the clip.

Mr. Boyega is a down to earth dude and stated that the racist fans would have to “get used to it.” Some fans just didn’t like the idea of a black stormtrooper, but comedian Patton Oswalt told Vulture that this kind of hatred is ridiculous.

“Oh, that’s depressing, Jesus Christ. ‘Star Wars,’ half the movie is aliens and robots, and a black guy is what set people off? I love how they’re reacting as if this is a classic novel that’s being cast — ‘I can’t believe they booked James Earl Jones to play Holden Caulfield.’ But this is a script that no one has read, so what the (bleep) are they talking about? If everyone in the original ‘Star Wars’ had been black, it still would have been a (bleep) blockbuster because the movie would have still been awesome. If ‘Star Wars’ had been Richard Pryor and Cicely Tyson, people still would have gone, ‘This movie’s (bleeping) great!”