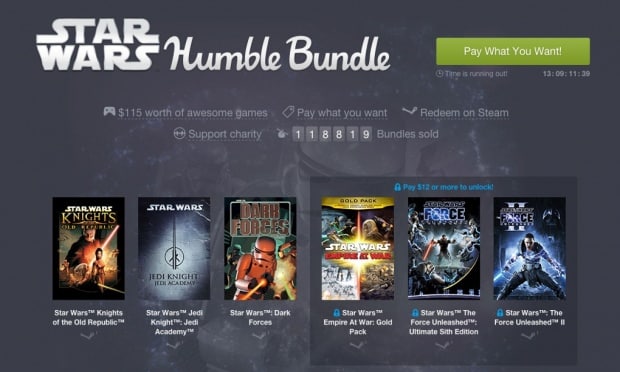 ..and it does it in less than 24 hours. Indeed, a Humble Bundle of games tossed onto the market in cooperation with Unicef, has raised some $1.3 million in less than 24 hours. The bundle is made up of a number of Star Wars-themed games, depending on how much money the buyer is paying for the deal. More than 134,000 sales of the bundle were registered within the first 24 hours of the Humble Bundle’s availability, and the package is slated to be kept available for an additional 13 days. The excellent performance logged by the Star Wars bundle put it right into second place on the all-time best selling Humble Bundles list, second only to the Sid Meier Humble Bundle, which managed to accrue more than $1.7 million over its first 2 days.

How exactly does this Humble Bundle deal work though? Players interested in picking up the game bundled up according to theme obviously, can essentially choose the amount of money they’re willing to shell out for it. In the case of the above said Star Wars Humble bundle, those who pay less than $12 get Dark Forces, Jedi Knight: Jedi Academy and Knight of the Old Republic. Those who pay more than $12 get all that, plus Empire at War: Gold Pack and the first two of the Force Unleashed titles. Those who exceed the average donation amount (which currently sits at $11.3) get still more games: Republic Commando, Knights of the Old Republic II: the Sith Lords and Battlefront II.

At any rate, for true Star Wars fans, this Humble Bundle is a must, especially so given the charity aspect of the purchase.

Humble Bundle have been involved in this charity game-bundle business for a while. The operation announced in December that it had raised some $50 million for various charities up to that point in time.