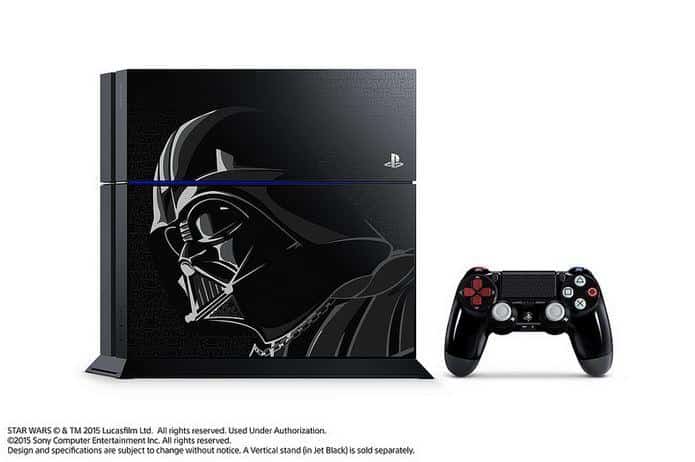 Star Wars: Battlefront is big. Indeed, the game is one of the most hotly anticipated titles of the fall in the whole of gaming and not just within the Star Wars community, which has followed the evolution of the project for more than a year now. With the release date drawing near, it seems like everyone is eager to jump on the Battlefront bandwagon, and yes, that includes the maker of the PS4, Sony too. The game will be honored through a special PS4 bundle, which includes tons of must-have goodies not only for fans of the game but for those of the entire Star Wars universe and canon.

The Bundle is centered around a PS4 console sporting a Darth Vader-themed design. Included in the bundle is a Deluxe edition of the game (the bundle launches together with the game itself on November 14), as well as a number of additional goodies. There’s a dual-shock controller which is modeled after Darth Vader’s chest-plate apparently and there are no fewer than 4 additional games, thematically all fitting in perfectly with the bundle: Star Wars Bounty Hunter, Star Wars Jedi Starfighter, Super Star Wars and Star Wars Racer Revenge. None of these titles were previously playable on PS4. They all feature enhanced graphics and trophy support.

While the above said bundle is a special edition one, there will also be a standard bundle released by Sony, which comes with a regular console, a jet black dual shock controller and a copy of the game of course, together with the above named four games.

As far as the gamers are concerned, the only question regarding the special Battlefront bundle is whether it’s worth picking up. For those who do not yet have a PS4, it definitely is. For players who are already owners, it all depends on their level of Star Wars fandom. One thing is certain: we do not yet know how much the above described bundles will cost.