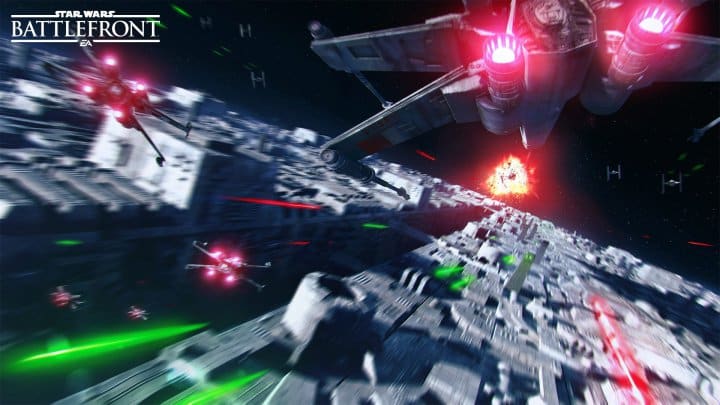 As the release of Star Wars Battlefront’s Death Star expansion draws near, more and more exciting details surface about the coming content. While we have known about what Death Star will deliver by and large for about a month now, few specifics were available. For instance, we knew about the coming of Chewbacca and Bossk as the hero-villain pair of the expansion, but thus far we knew little about how they would be wreaking havoc on their opponents. Chewbacca will apparently carry a supercharged bowcaster, and he will also be able to just smash those unfortunate enough to get near him. He also has an additional ability: the wookie’s roar will disorient nearby enemies.

Bossk on the other hand will be able to drop grenades close to himself without taking damage and his blaster is equipped with infrared sights.

Luke Skywalker and Darth Vader will square off in the expansion as well, this time battling each-other in space, with the former in the Red 5 X-wing and the latter in a TIE Advanced X1 fighter. Skywalker’s fighter isn’t particularly special, except for the fact that he has R2D2 riding shotgun and repairing damage, and that does indeed make a huge difference.

Vader’s TIE fighter in the meantime boosts the damage of nearby friendly fighters.

To top it all off, some of the existing heroes will get new costumes. Princess Leia for instance will get the hairstyle and the garb known from “A New Hope” while Han Solo and Luke Skywalker will receive stormtrooper armors.

In addition to the new content delivered by Death Star, Battlefront players will be glad to learn that there’s a VR mission in the works too, which will take advantage of the opportunities offered by the Death Star space battles in this respect. The mission will be titled “Rogue One X-Wing VR Mission”.