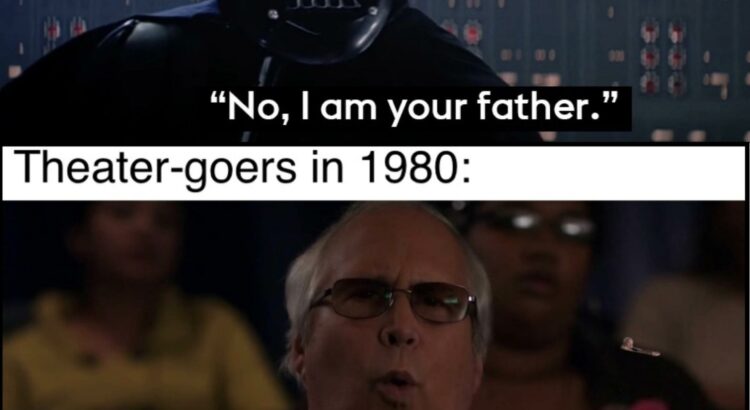 Imagine an entire theater filled to capacity suddenly gasping in unison…then holding their breath as Luke searches his feelings and cries out in anguish. Like when Thanos snapped his fingers in Infinity War….only much, much bigger. And just like nobody knowing what would happen in Endgame, none of us knew if this shit was true or if it was Vader just being a douche.

Me and my friends argued endlessly over whether or not it was true. My stepdad (who took me to see all three OT films in the theater,) assured me that they wouldn’t have thrown that shit in there if it wasn’t real, and my older sister kept telling me I was an idiot because…and I quote here…”Darth Vader wouldn’t lie about something like that.”

Every time my friends and I were playing with action figures, somebody with a Vader figure would say something like, “Luke has to do what I say, I’m his dad!” and then everything would devolve into a huge argument with a lot of, “Nuh uh, no he isn’t!” and stuff like that thrown around.

When I saw ROTJ (the first matinee showing the day after the premiere at Mann’s Chinese Theater…feel free to be jealous peasants,) and Yoda confirmed everything, I was sitting there with a surprised Pikachu face. On the way home I kept asking my stepdad dumb questions about it, like “If Darth Vader is Luke’s dad, why would he cut his hand off?”

This fucking guy says, “I don’t know, maybe Luke kept asking a bunch of stupid questions and it was the only way to get him to shut up.”