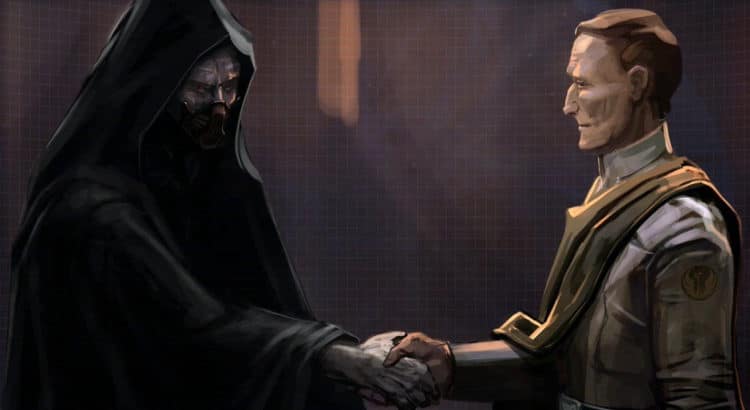 The Treaty of Coruscant marked the end of the Great Galactic War between the Galactic Republic and the Sith Empire. The two factions met on Alderaan to discuss the terms of peace, while the treacherous Sith launched a simultaneous attack against the Republic on their home world of Coruscant. The sacking and occupation of Coruscant allowed the Empire to force the Republic into a completely helpless position, leaving them no choice but to surrender to the Empire’s terms.

The Republic gave up control of multiple star systems and trade routes to the Sith Empire and gained little to nothing in return. This treaty marked the beginning of a Cold War.

Greetings. I am Master Gnost-Dural, keeper of the Jedi archives. The Jedi Council requests I perform a daunting task: to revise the order’s historical records in light of new revelations about the formation of the Sith Empire. Specifically, I am to trace the conflict between the Empire and the Republic, the Sith and the Jedi, and to uncover the roots of the struggle which now plagues us. I’ve chosen to begin with the singular defining event of recent years: the unprecedented peace agreement between the Sith Empire and the Galactic Republic – The Treaty of Coruscant.

Three centuries after the death of Darth Malak and the end of the Jedi Civil War, the true Sith Empire returned from deep space, attacking the Republic. They began a war unlike any other in the galaxy’s history. The great galactic war dragged on for decades. Thousands of Jedi and Sith were slain, and countless star systems were ravaged. Though he now controlled half the galaxy, the Sith Emperor grew impatient; he had expected his triumph to come quickly. The Lords of the Emperor’s Dark Council surprised the Republic Senate with an offer of peace: a reprieve the Republic could not afford to ignore.

Matters had become complicated for the Republic war effort since the critical trade route between the Outer Rim and the Core Worlds was recovering from the Mandalorian Blockade. The Jedi Council urged caution as the Senate considered the Sith’s offer, but even they had to agree – the war was unwinnable – peace was the only hope.

Republic and Imperial diplomats convened on the planet of Alderaan to discuss a galaxy-wide cease-fire… But the Sith still had one play to make. The Imperial fleet launched a surprise assault on the Republic capital of Coruscant. Bombarding the planet from orbit and storming the city-world’s bottomless towers. With Coruscant’s defenses incapacitated, the Imperials annihilated the Jedi temple, captured the Senate tower, and held the entire planet hostage.

Back on Alderaan, Republic diplomats had no choice. Despite unfavorable terms, the Treaty of Coruscant was signed. Jedi and Republic troops began withdrawing from battlefields around the galaxy, leaving star systems to fend for themselves and to be quickly swallowed up by the Sith Empire. The Jedi returned to Coruscant to find their temple in ruins and irate senators blaming the Jedi for all the Republic’s troubles.

Though still committed to defending the Republic, the Jedi relocated to their ancient home-world of Tython – to rest, meditate, and seek guidance from the Force.

Thus began the unprecedented stalemate – the Jedi reconnecting with their roots, the Republic nursing its wounds, the Sith consolidating their power, and a galaxy divided between darkness and light. In retrospect, this outcome was inevitable, and would have come sooner were it not for some of the Republic’s less savory allies. I will elaborate on this theory soon.