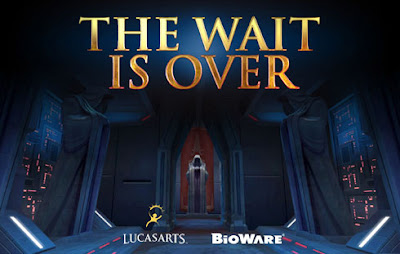 The news has been making the rounds across gaming news sites. Yesterday during EA’s fiscal year 2010 update conference call CEO John Riccitiello apparently made a statement that could be interpreted as indicating Star Wars: The Old Republic’s potential release date. When asked about EA’s upcoming plans for next year he said the following:

“On the digital side, while we’ve got a great number of incredible initiatives, one key driver is going to be the launch date of our major MMO,” Riccitiello said.

“As it stands today, the game is making great progress towards a spring 2011 launch. But given the volatility of this particular sector, and the fact that we haven’t yet provided a specific launch date, we will be excluding the revenue from our fiscal 2011 guidance plans.”

No specific mention of Star Wars: The Old Republic, but people are reading “our major MMO” as meaning that game. Other candidates could be APB or Need for Speed: World Online, both scheduled for a 2010 release, or some major MMO that they haven’t announced yet.

So there’s a lot of question marks. BioWare has refused to comment or confirm that he was talking about SWTOR. It seems unlikely though that SWTOR will release this spring; next spring seems more likely target (if later than the late 2010 that people were hoping for). And also note that he just says that they’re on target; that doesn’t mean at all that the game won’t be delayed some (perhaps for the holiday season of 2011).

As it is it seems best to anticipate that Star Wars: The Old Republic won’t be released before Spring 2011.