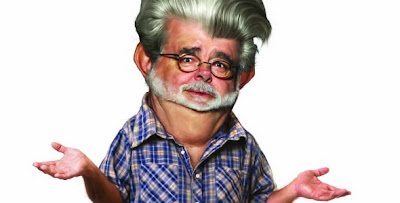 Most of this program was divided into discussing two films: American Graffiti and Star Wars. The latter actually encompasses six films over the years but the first one is talked about by far the most in this Biography episode. The rest of the show is mainly other Hollywood people discussing George Lucas’s ideas and personality.

Lucas, himself, is kind of boring, speaking in a monotone with a lot of “uhs” between words. Thankfully, his movies are far more interesting than him. Later, Liam Neeson and Harrison Ford – two dynamic actors on screen – demonstrate they are even more awkward than Lewis is being interviewed.

However, it was interesting to see and hear all the main actors from American Graffiti, and they had interesting tales about the film and how Lucas had to really struggle to get it released. Those actors included Cindy Williams, Ron Howard, Charles Martin-Smith, Candy Clark, Paul LeMat and Richard Dreyfuss.

This film “set his (Lucas) career in high gear,” its said on this show, which is why it got so much attention. That was in 1973. Four years later, Star Wars was released and Lucas became a big name in films after that. He was smart enough to get “the sequel rights” to this film and Lord knows how many millions of dollars he’s made off of them. Perhaps this is one reason VHS and DVD collectors have seen so many editions come out on the Star Wars series. Lucas makes a ton of money each time.

Carrie Fisher, one of the co-stars of Star Wars, said Lucas “has the most amazing imagination of anybody I’ve ever worked with and is almost childlike with it, but he’s very adult with his technical information and what to do with it. He really knows how to create different worlds.”

Along the way, we also get Lucas’s early history and how an auto accident in his late teens changed him dramatically. Then, after success at the University of Southern California, he later hooks up with Francis Ford Capolla and becomes great friends and partners with him. Finally, they go their separate ways, film- wise, and don’t do too badly: Lucas makes American Graffiti and Cappolla does “The Godfather!”

When this program was aired, Lucas discussed that he had just finished the last installment of Star Wars and thought it might be too dark to be a hit with the public…..but I believe it was a hit, just like the others.