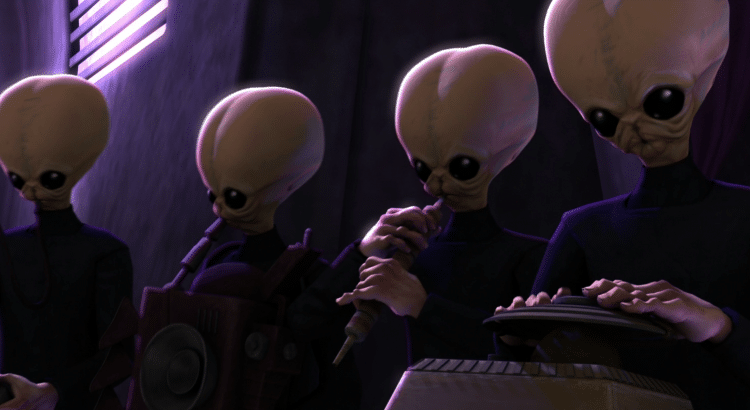 Bith were a highly advanced craniopod species native to the planet Clak’dor VII. They had pale skin, large heads and eyes, and long fingers. Bith had acute senses of smell, high manual dexterity, and could sense the tonal qualities of sound as well as other races sensed colors. They could also see microscopic details of nearby objects, but were extremely nearsighted as a result. Bith never slept unless utterly exhausted.

Bith were one of the galaxy’s most ancient races, with a history going back millions of years. Their society was highly regimented, with everything from mate selection to political leadership controlled by sophisticated computer programs. Bith were also unable to reproduce naturally, instead relying on artificial conception and gestation.

Mates brought genetic material to a Computer Mating Service for analysis against prospective mates. Bith children were created from genetic material from two parents, which was combined, fertilized, and incubated for a year. The Bith’s internal systems were different than most humanoids, as the Bith had only one lung. Bith also lacked a proper nose, instead having olfactory organs hidden in the flaps of their cheeks.

Clak’dor VII’s main exports were the products of the Bith intellect. Many Bith worked as engineers or data analysts. Their hearing also made Bith such as Figrin D’an and the Modal Nodes (the house band in the Mos Eisley Cantina circa 0 BBY) excellent musicians.