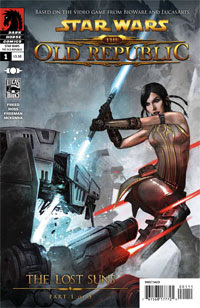 I was super excited to get my hands on my own copy of Star Wars: The Old Republic- The Lost Sons comic and just as excited to meet Alexander Freed himself. On the ride back home, I was already reading my comic. I can see why they said the comic would be of interest to anyone planning to play TOR as well.
This is the first of a five-issue comic book series about Theron Shan and it contains a lot of lore and background for the game.
As Freed said on the official TOR forums, “”I like to describe The Lost Suns as our ‘ninth story’ — every class in The Old Republic tells its own Star Wars epic, and Theron’s tale intersects with the other eight and pushes the greater game story forward, just as they do.“
Right from the first page of beautiful artwork, the comic sets up the key characters. It represents Satele’s companions and whole Satele Shan is not the primary protagonist, she has a big role in the back story of the comic series. She will appear in a flashback told by Jedi Master Ngani Zho. She’s the leader of a strike force seeking to stop Darth Mekhis during the Sith invasion. We know little about her at this point in the story. You might know her from the Hope trailer as well as the Return trailer when she was just a padawan.
We are quickly introduced to Darth Mekhis in the present and flashback portions of the comic as the bad guy. She uses technology to try to further her advances to Imperial glory. The flashbacks give us portions of a battle between Darth Mekhis and Shan in which she survives the faceoff but we’re not sure why at this point.
We are led to believe that Theron Shan is a lost son to Satele and becomes the protagonist of the comic series. He has a shady past that reveals itself during the course of the series. It’s possible that his story might mirror Satele’s as well as the player’s story when we play TOR for ourselves.
We are introduced to some companions, such as the Tolian Twi’lek and M-6, his trusty droid. Master Zho tells the flashback story and was also the Master of Satele Shan. This latter bit of info is a little confusing as it seems Satele had multiple Masters, where Jedi typically only have one so I’m not sure at this point where this Master falls in the storyline.
The first episode is basically just an introduction to the characters and definitely leaves you anxiously hanging on to have the missing pieces of the puzzle filled in. The comic is well worth the read and it seems the series will fill you in on your specific class story in the game.