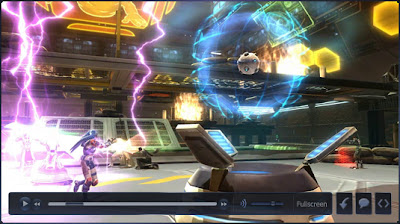 In yesterdays Friday Update Dallas Dickinson gave  us a look at Huttball, the new warzone variety that takes place in SWTOR on a map called “The Pit”. It functions much like a game of capture the flag, the “Huttball” being placed in the middle and carried over the opposing team’s line to score points. This type of PVP is going to be really interesting if you ask me.  I can imagine Entire guilds and specs will come about JUST for Huttball.

“In a time of turmoil where two mighty armies ready themselves, many citizens of both the Galactic Republic and Sith Empire have begun to look for an escape from the uncertainty of impending war. For many people on Nar Shaddaa this escape can be found in the gladiatorial confines of ‘The Pit,’ where two teams compete in a violent game for the amusement of Giradda the Hutt and thousands of spectators!””

Here is the official video:

And here is a 15 Minute Hutt Ball game. The gameplay looks really cool. It’s like close quarters capture flag with only one flag.

While it is basically CTF with a single flag and enemy spawn capture points… Good god does that look fun. Also, there seemed to be an insane lack of strategy and passing. Granted, it’s probably the first time these people have played it, but you can imagine how many different strategies/tactics will come into play.

Hopefully we get some Pazaak going, too. The more games to play within the game, the merrier.