Often quiet and enigmatic, Weequays can be found throughout the galaxy, from the lower levels of Coruscant to the distant desert flats of Tatooine. They are a humanoid species with coarse, leathery skin and bald heads. By tradition, a Weequay wears a braided topknot on one side of his or her head.

Hailing from the arid world of Sriluur on the remote Sisar Run, Weequays are a laconic people deeply rooted in ancient traditions. Much of their culture is structured around the reverence of a pantheon of gods, one of the foremost being Quay, the God of the Moon. The Weequays keep a wide array of trinkets and totems to facilitate communication with their gods. Swindling off-worlder entrepreneurs have taken advantage of this cultural trait, and infested Sriluur with countless useless baubles said to divine the intentions of the deities. 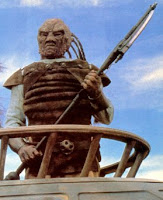 Weequay society is clan based, and a Weequay’s identity defers to a clan. Often, individuality is so secondary that Weequays do not take proper names, unless leaving Sriluur or dealing with off-worlders. Weequays do not need names to identify one another, as their pheromonic methods of communication can convey a great deal of information without words.

Though some may view their ways as quaint and primitive, Weequays have built large cities on Sriluur, such as Dnalvec. These cities enjoy much trade from the busy Sisar Run. Most Weequay cities are built around a thal, a religious shrine to which devoted followers leave offerings of foods or valuables.

The close proximity of Sriluur to Hutt Space means that many Weequays are employed or enslaved by Hutt crime lords as bodyguards or enforcers. Such underworld careers have led to Weequays being found throughout the galaxy. Weequay expatriates are easily identified by their topknots. Custom dictates that a Weequay grows a braid for each Sriluurian year off planet. Upon returning to Sriluur, a Weequay shaves off the braids.

Sources:
A Guide to the Star Wars Universe
The Essential Guide to Characters
Galaxy Guide 12: Aliens — Enemies and Allies