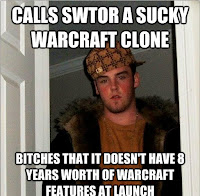 Are Internet trolls out to get SWTOR? It would appear so based on some of the bad publicity the game has gotten as well as other trollish activity such as bug reports for glitches that don’t exist and players claiming they were banned for odd reasons only to have BioWare staff come in and confirm they were not banned at all. It’s all a bit odd but it seems like there are some trolls out there just looking to make BioWare/SWTOR look bad. Maybe they are disgruntled SWG players? /shrug

Remember I brought you that story about the Technorati blogger who was hating on SWTOR? Well, there’s a new story that’s a bit of a counter to this one but they have more of their facts straight. Team Asunder Magazine brings us The Internet vs. Bioware: How Trolls Set Out To Destroy The Old Republic.

“The undeserved negative publicity that The Old Republic has garnered is almost mindboggling. Like a kind of collective inside joke that a fourth of the internet heard about, and then immediately forgot why was funny, the sheer amount of damage that a very vocal group in the internet will attempt to heap onto one game makes absolutely no sense from any logical standpoint. From the GameFAQS Boards, to 4chan, and even Bioware’s own The Old Republic forums, nowhere appears to be safe from this bizarre culture that seemed to have sprung up overnight with no intention but to rape all the reputation of a game seemingly at random, subtlety and experience be damned. Talk about this game, or dare admit to playing it, and you will be flamed to a well-done crisp by every meaningless troll in a desperate attempt at absorbing you into their collective of hate mongering.”

What’s weird is that there seems to be a whole team out to get BioWare/SWTOR for some reason not specified. The author of the above-quoted article doesn’t even like BioWare or their games so this isn’t a “fanboy” defending the game. He goes onto show proof and evidence of these extreme BioHaters and it makes for a pretty interesting read for sure.

So check it out and let us know what you think. Why are the “haters” seemingly out to get SWTOR?