“Why do you play MOBAs?” I was taken back by the question.
“They’re fun I guess…” I didn’t know how to reply to my friend.
“What’s so fun about a bunch of kids nerd raging at you?” I can honestly say that part of MOBAs was not
fun.”
“You learn a lot…About game design, about player reaction, and a lot of the skills are interchangeable.”

As many of you know I’m a big fan of the MOBA genre of games. MOBAs, or Massive Online Battle Arenas, are games such as Defense of the Ancients 2, DotA 2, League of Legends, LoL, and Heroes of Newerth, HoN. Each time has five players, with teach player controlling their own hero. The basic goal of all three games is to destroy the enemy team’s “throne” to win. It’s more complex, but that’s the basic idea behind MOBA games.

While MOBAs and MMOs are very different they both take queues from each other in multiple ways. MMOs created the holy trinity (Tank, healers, damage dealers), and you see them in a lot of MOBA games as well. But as players we can each learn something from the MOBA genre. And that’s what this week’s article is all about.

In MOBA games communication is vital. Telling your team mates when you’re stunning or plan to move across the map is vital. I do a lot of pub heroic flash points, and I constantly communicate with my team. “Using my med pack!” or “Popping resilience!” While they can get annoying, they still get vital information to adjust healing or dpsing.

Communication makes everyone’s life easier. If you’re playing with friends using Skype, Ventrilo, or Mumble are useful, no matter how many times one has completed a flash point, operation or pvp.

3). Sacrifices must be made

In MOBA games a balanced team is 50% of a win. One of the most important roles for a MOBA team is a role called the initiator. The initiator is the one who starts the fight. A lot of the time they die in the process, but if done properly their team will win the fight. What a lot of players don’t understand in both MOBAs and MMOs is that their team takes priority to personal goals. Stopping your DPS for a second to throw a heal on someone may save their lives. Taunting an extra mob to keep others alive for even just a second, might mean the difference between winning and losing.

The difference between winning and losing MOBAs is how one reacts. MOBAs require players to think about multiple scenarios in a short moment. While most of it comes from experience, a lot of it still requires players to think on their feet.

A lot of people fear the worst when playing The Old Republic. I’ve seen players simply give up on fights that could have been salvaged had they simply played differently. This is really only completed by constant playing, knowing your class and role inside and out, and who you’re working with. If you stun will your Sage sprint away and pull you with them to safety? These are all things you have to take into consideration which are second nature in MOBA games.

No matter what you end up doing in MOBAS or in The Old Republic, the most important part is team work. Not getting frustrated with your allies is important. Explaining things, instead of raging will help both your team and you in the long run. If you’re looking to try a MOBA, do research before simply jumping into one. I would highly suggest Heroes of Newerth, but ultimately the decision is yours. Until next week may the force be with you! 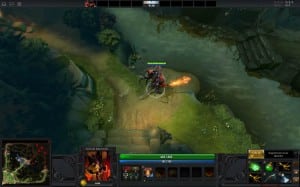