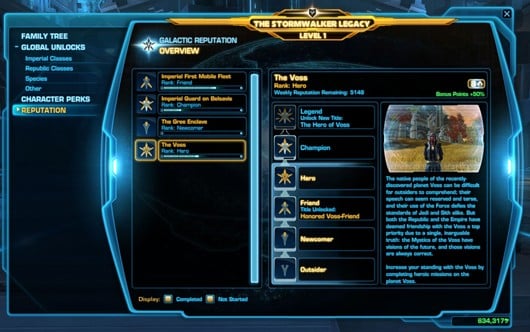 The Gree Enclave and the The Voss are the names of the reputation groups that are shared by both factions.

The Gree is actually a new race of individuals. Gaining reputation with this race and becoming allies is something that both factions want and for good reason. Their technology is so advanced that it’s way above the existing technology the Galactic now possesses. Located throughout the “Relics of the Gree”, you’ll need to complete missions in IIum’s Western Ice Shelf to earn reputation with the Gree Enclave.

Both the Empire and the Republic factions have limited knowledge of how the Force works but the inhabitants of Voss live on a planet full of mystical powers. They have very powerful visions of the future and these visions always come true. For this reason, both factions hope to be allies with the Voss. You’ll need to complete the Heroic missions located on the planet to earn reputation with the Voss.

The two reputation groups associated with the Republic faction are called the Republic Hyperspace Armada and the Fifth Assault Battalion.

The Republic Hyperspace Armada (RHA) was created by Admiral Sodoh Reddik. They’re always on guard looking for any type of threat that needs to be taken care of and they welcome any skilled pilots that are interested in supporting their cause. You’ll need to complete the Heroic Space Missions at Fleet Command to earn reputation with the RHA.

The Republic’s Fifth Assault Battalion (RFAB) is the leading defense for all the evil and gloom found in on Belsavis in Section X. Their goal is to stop the Dread Guard from accomplishing whatever evil plans they have brewing and the RFAB is relentlessly pursuing justice to accomplish that goal. You’ll need to complete the missions on Belsavis located in Section X to earn reputation with the RFAB.

The two reputation groups associated with the Empire faction are called the Imperial First Mobile Fleet and the Imperial Guard on Belsavis.

The Imperial First Mobile Fleet has the reputation of being the main force that can prepare for action in an instant to go up against anything or anyone that threatens the Empire. You’ll need to complete the Heroic Space Missions for Fleet Command to earn reputation with the IFMF.

Now that the new Galactic Reputation System is in place, there are a few Reputation Vendors showing up on several of the planets to represent their corresponding faction. Here are the rewards available at this time.

The reputation reward for Voss is the Voss Ambassador Set and the reward for Belsavis is the Section Guardian Set. The only difference between these sets for each faction is the design of the helmets.