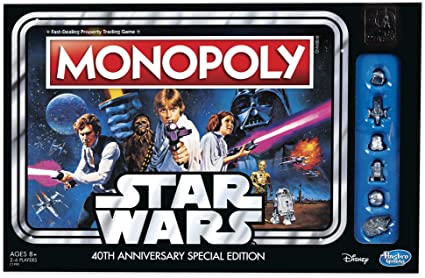 Hasbro Interactive’s Star Wars Monopoly is a fully animated interactive PC version of Parker Brothers’ 1997 Monopoly board game, albeit with the 20th Anniversary “Star Wars Trilogy Special Edition” twist. Although the rules remain the same as the classic Monopoly game and the goal still is to buy up as many properties as possible and not becoming bankrupt, the setting is no longer Earthbound (as in Atlantic City) but the Star Wars galaxy from the Classic trilogy.

In Star Wars Monopoly, one can either play solo against the computer’s artificial intelligence (AI), other human players (the “hot seat” option), or on the Internet through such portals as the MSN Game Zone. (Players who install this game will notice it will later show up on their MSN or Windows Messenger as an additional option.) While it’s always more fun to play against other people, the solo player game can be very tough, especially if one chooses to play against several AI opponents set on “Difficult” level.

What makes Star Wars Monopoly truly fun is the change of setting from Atlantic City to the Star Wars galaxy. While the property colors and values are the same as “traditional” Monopoly, the names of places and currency have changed (from dollars to Galactic Credits). 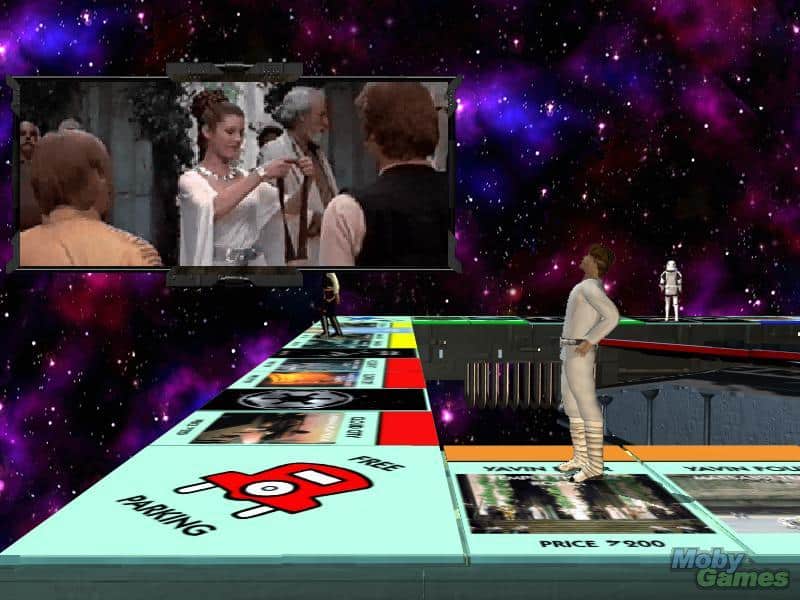 Game play is easy, far easier than setting up the board version. Players choose their characters (instead of a shoe, car, or thimble one can choose a character — Darth Vader or Luke Skywalker, for instance — which at first is rendered like a tin game piece), then the Banker (C-3PO, voiced by Anthony Daniels, who also wrote some of his comments) distributes the initial money allowance. Then, with a mouse click, the dice are rolled and play begins. One can play this game for brief periods of time, save it with the File Droid, then resume at a more convenient time, or it can be played in one long marathon, provided there are no power outages. The game is not complicated to play; a single mouse click is all it takes to roll the dice and the computer does all the rest…moving the pieces, handing out the money or taking the payments, and even reading the Rebel and Imperial cards (the Chance and Community Chest cards with a Star Wars twist). Not only is it relatively easy to handle (it is not, however, easy to master), but it is quite fun, too.