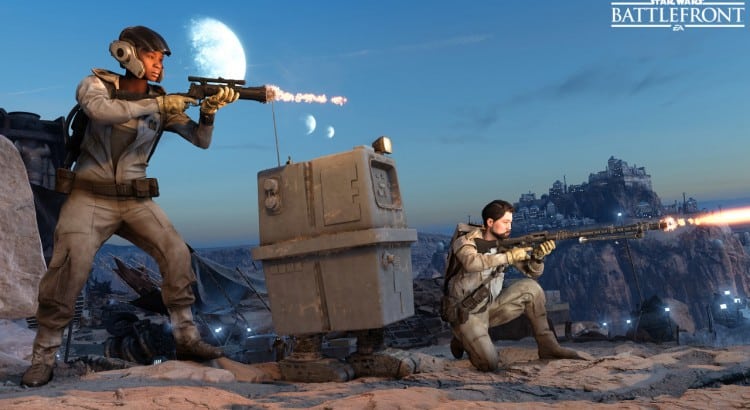 Adding to the growing list of things that Star Wars Battlefront will NOT have: in-game voice chat.

EA has confirmed Star Wars Battlefront will not feature in-game voice chat on any of its three launch platforms. Players will have to use third-party software if they want to talk to other players in the game.

@moodyknowsall Battlefront will utilize the PlayStation 4 and Xbox One built-in party system for in-game chat.

And the PC version of the game will suffer the same fate:

@RaiderGaming15 You can choose your favorite third party software to communicate with friends on PC — EAStarWars (@EAStarWars) October 13, 2015

As you would imagine, many players are disgruntled by the news that they will not be able to easily chat with other players while playing the game. While there are many players who enjoy using system-wide party chat on consoles and programs like TeamSpeak or Curse on PC, it’s still frustrating to not have the option at least, for in-game chat. If you wanted to talk with other players on your team that were not on your friends’ list or otherwise connected to you with 3rd party software or tools, you are facing severe limitations.

One of the biggest complains (and confusions) is that this is a team-based game with NO single player mode. So you can only play with your teams but you can’t actually talk to your team…

There will be no way to communicate and strategize with your teammates in many cases due to the party chat limitations on both consoles. the PS4 only allows eight and the Xbox one only allows 12. This is smaller than most Battlefront game modes, leaving you unable to chat with all of your team.

What do you think about this move? Will this affect how you play the game or even your decision to purchase?