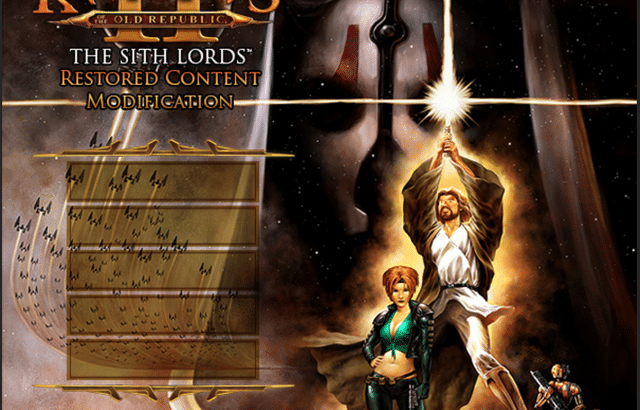 Who wants to play some KOTOR II? I know a lot of our readers are big KOTOR fans like myself and I am excited to tell you about this really cool project that’s on the way soon – a mobile KOTOR II port, fan-made, already in Alpha and releasing soon.

How does it work?

Here are details from the project summary:

This project is meant to attempt to port all content from Star Wars: KOTOR II TSL into Star Wars KOTOR 1 Mobile (for Android / IOS), resulting into a partially / fully playable mobile version of KOTOR II TSL for IOS / Android.

The game will be installed and ran as a Total Conversion Mod over the mobile KOTOR 1 version.

The mod development will consist in the following stages:

– 1. Converting all files from the PC version of KOTOR II, to work with the older KOTOR 1 engine.

– 2. Adapting these files to be installed as a mod (into the Override folder, etc.) for KOTOR 1

– 3. Downgrading / adapting features from KOTOR II that are inexisting in KOTOR 1 (like Crafting, Lightsaber Forms, Companion Training and Loyalty, etc.)

– 3. Adapting and optimising the mod to work on IOS / Android KOTOR 1.

It is a fan-built, open-source project and anyone who is interested in participating and making it better is allowed to. Per their website:

The development of the mod will be completly open and all content will be released to the public as it gets created! This is our vision, we call it the open-development concept!

Everyone who believes they can contribute or help with this project in any way are invited to!”

You can follow the project progress from their website, learn more about the project and what it entails, and find out how to get it yourself.

There are also tutorials like this one: [TUTORIAL] How to explore all maps / levels and create your own save files and upload them to mobile

The mod release is free to modify and redistribute, re-release, or include in your own mod project. Giving credit is not mandatory, but we encourage you to do the right thing and give credit where credit is due.