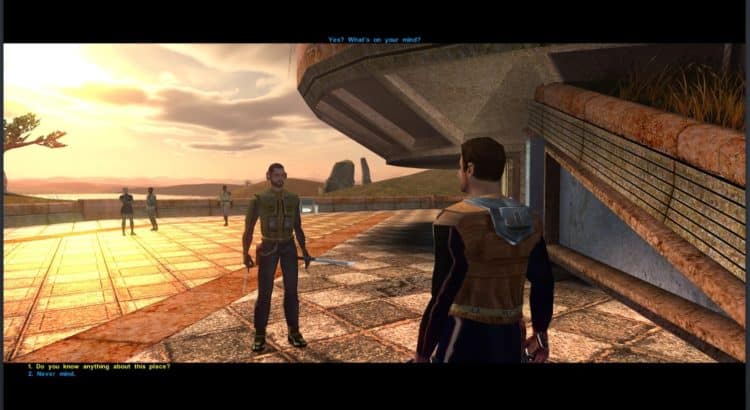 We love KOTOR and we’ve made that pretty clear in our posts over the years. KOTOR has seemed to take on a life of its own in the fandom that grew around it. And you just don’t see that anymore today. The Star Wars games that are being made aren’t hitting those same tones and creating the same feelings in the fans.

What was it that made KOTOR so special?

Sara Elsam has written a really great piece for LAD Bible that basically expresses everything I feel about KOTOR, and how it shows us the model for what Star Wars games should be like today.

They basically say everything I would say already, so rather than repeat, here’s a snippet from Sara:

“And in Knights of the Old Republic, you get to pick your destiny. You can be bad – like, really bad. Sith bad. Want to force someone to kill their best friend? How about selling some wookies into slavery? Or perhaps you’d like to mercilessly slaughter droves of Sand People? Your psychotic pet robot friend, HK-47, will always be at the sidelines, cheering you on.

Turns out exhorting people racks up the Credits way more than running errands out of the goodness of your heart. It’s hard to be good in Knights of the Old Republic: many of the choices, of self sacrifice and justice, are actually just plain inconvenient. And perhaps this way, Knights of the Old Republic illustrates that it’s far easier to slip into evil then it is to maintain the good fight.

And again, this is much more interesting than the wave after wave of bland heroes paraded across the Star Wars universe. Folks who know they have to do right. These aren’t the folks that necessarily make good characters, because where within them do we see our own struggle between right and wrong?”

It’s just a piece of their reasoning but it’s so spot-on. KOTOR was deep, like the original Star Wars Universe was. It made you think, it made you look at the world around you, and it made you face consequences of your choices. The things you did in the game mattered.

It was fun, but immersive. It was fiction, but realistic. Like Sara says, “If anything, the Star Wars video games have more scope and freedom to explore weirder frontiers than any film or TV show.” and to me, that was a big part of the appeal.