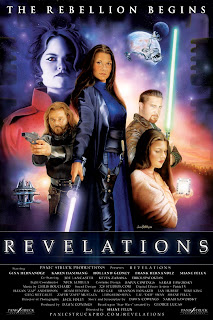 Star Wars: Revelations is a fan film released on April 17 2005, created by fans of George Lucas’s Star Wars saga. As Lucasfilm has generally turned a blind eye to the creation of many not-for-profit derivative works, Revelations is one of many fan-produced Star Wars creations. (See The Official Star Wars Fan Film Awards for further examples.)

Revelations is noteworthy for being both significantly longer (with a running time of 47 minutes, 13 seconds) and substantially more expensive than the average fan film, with a final budget ranging somewhere between $15,000 and $20,000. It takes place between Revenge of the Sith and A New Hope. The film intended to give a reason for why the Jedi Order was extinct in the original trilogy.

The destruction of the Jedi Temple was devastating. Accusing the now-defunct Confederacy of Independent Systems of the attack, Emperor Palpatine declares martial law on Coruscant. As the Imperial presence spreads to most systems, Palpatine calls the scattered Jedi order ineffective. Their protests are denounced as treason, all Jedi are declared traitors, and are now fugitives of the Empire.

The film centers on Zhanna—one of the Emperor’s Hands—and Taryn Anwar, a Seer who had helped Zhanna hunt down the Jedi without knowing that Zhanna had turned to the dark side. (Seers, the Jedi with visions, are an original contribution to the Star Wars galaxy.) Taryn seeks to redeem herself; her visions lead her to a dangerous ancient Jedi artifact said to give the bearer great power.

Fan films by definition are not considered canonical. Revelations was written and produced before the premiere of Revenge of the Sith, and inevitably there were discrepancies between what the filmmakers hypothesized would transpire in Revenge of the Sith, and what was eventually depicted in Lucas’s finished film. Many of these inconsistencies revolve around the chronology of the destruction of the Jedi order.


“Revelations” is a non-profit Star Wars fan film that was shot within the Northern Virginia, Maryland and Washington DC Metro Area. “”Revelations” is made possible through a combined effort of artists, fans and the local film industry. Everyone who has worked on “Revelations” is a volunteer. No one is paid to make this film. Panic Struck Productions set out to produce their first independent film with a very small budget and the result is “Revelations””

The goal has always been to push the limit of independent film making and show what can be done with a dedicated cast/crew, the vision of Panic Struck Productions, and the affordable solutions in today’s market in terms of film and video. We also wanted to showcase the large pool of talented individuals who are out there and show how an independent film such as Revelations can push the limit of small Hollywood.

Panic Struck Productions has formed a strong and committed team in producing a high caliber fan film. With a CG team spanning the globe as well as a cast and crew from all over the east coat and beyond, the effort for Revelations has been huge. From cast to crew, extras to sponsors, this movie was made possible by those who have supported the idea and dedicated so much to the film.

“”Revelations” is dedicated to the fans, artists, believers, and dreamers of a galaxy far far away... Panic Struck Productions offers you “Revelations”. We hope you enjoy the efforts of our work.