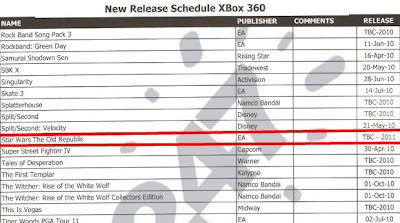 Yesterday a rumor surfaced that Star Wars: The Old Republic (SW:TOR) could possibly be heading to the XBox 360 according to a new internal Xbox 360 release list acquired by VG247. The list details scheduled for release next year, but the most curious entry is near the bottom of the document that states SW:TOR on the Xbox 360 list marked with TBC-2011 release. However, it looks like for the moment the rumor is just that, despite the information in the document. SW:TOR Community Manager Sean “Ashen Temper” Dahlberg responded to the discussion on the official SW:TOR forums, emphasizing that SW:TOR is being developed for the PC with Windows as an operating system at this time.

I know many of you have heard this before but I’ll go ahead and reiterate it for those of you who may be new: